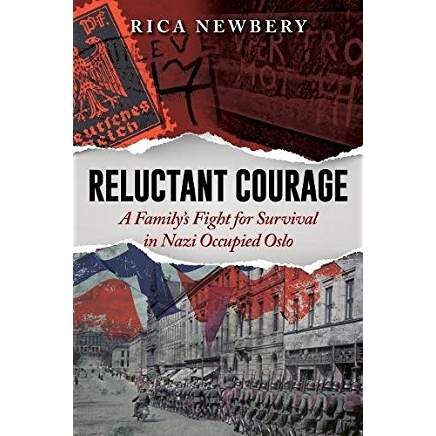 A Family’s Fight for Survival

Rica Newbery’s “Reluctant Courage” takes place in Nazi occupied Norway. I actually learned quite a bit as I was reading this story. I of course knew Germany invaded Norway but honestly never knew much about it.Whenever I read about World War Two and the rise of Nazi Germany it amazes me how the world ever let this happen. Also when I see movies or read books about the Nazi occupation it’s almost always about occupied France.The author 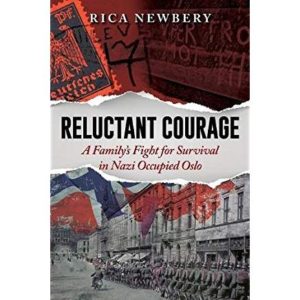 seems to have a good grasp of what it must have been like trying to live in these times. I think she researched it well (see below on how she did that)The book does take a few unexpected turns. Just as you think you are not going to like a character you see there is a completely different side of him. That was the case for me with the two main men characters.

We begin the Nazi’s already occupying the country of Norway. We see the trials and tragedy of the war . Waiting in line all day just for something to bring home for the nightly meal. The quartering of the soldiers in private homes. The loss of loved ones.The struggles of the resistance.Worse of all the rounding up of the Jews.

Maria is a mother trying to raise three daughters during these trying times and of course it’s not an easy task. It’s a very good book on the ups and downs of family relationships. The children missing there father when their parents are no longer together. The fact that it’s war time just exasperates the situation.

It is 1942 in Oslo, two years into the German occupation of Norway Maria and her three daughters are used to coping with the hardships of war, but when Maria’s husband leaves her for another woman and a German officer is billeted to their home, their troubles are only just beginning. Maria and her daughters must stop fighting with each other and find a way to survive.

My Research by Rica Newberry

My mother, Brit Maja Holmsen was eight years old when the Nazis marched into Oslo, her home town. She grew up to become an artist and a very powerful and magnetic character. Like most of us she had her flaws, and I wanted to understand her, to imagine the hardships she endured, and how this must have shaped her as a person. I also wanted to feel closer to my Norwegian roots.

How did I research for this book? It was easy to start with, as I have been brought up with many stories of those war years, from my mother. I heard about cordon-bleu swede, bread eked out with newspaper, hospitals being full, a soldier billeted to my mother’s home, feeding left overs to the pig in her aunt’s house just outside Oslo, and exciting returns from her father before he disappeared. My Norwegian cousin told me that the Gestapo had called in the night some time after.

I had to look things up every time I wrote descriptions of the surroundings and events, and learned much history as I went along. I had books and extensive information via google, of course. I visited the Resistance Museum in Oslo and took the train to Trondheim, observing the scenery on the way, and drove from there to Falstad Museum in Ekne near Levanger. One of the dates in my novel approaches 26th November 1942 when 532 Jewish people were rounded up and made to board the SS Donau, bound eventually for Auschwitz.

The courage of the Norwegian people during the occupation is truly inspiring. My aim is to bring the war years in Oslo, as experienced by Maria and her three daughters, to life. The characters in my book are fictional, however, and are not true to any real people.

I am a retired psychiatrist living in Bristol with my husband and elkhound. After being totally immersed in work and bringing up two children, I finally came up for air when I retired. I enlisted for a Creative Writing course with the Open University and knew then that I was going to write a novel inspired by my mother’s life.

I hope you enjoy my book. If you do, I am sure you will feel the same admiration for the survivors of the war that I do.

War entered Norway by stealth on April 9th, 1940. Norwegians were taken unawares and apart from the explosion of the Blucher on Oslo Fjord, they were taken without a fight. The people of Oslo just stared as German troops marched in and took over.

Soon everywhere you looked there were red flags with swastikas, soldiers with rifles, motorbikes, women in long queues for food, and posters full of Nazi propaganda. Maria faced each day with resignation and resentment, not wanting to think too far ahead, and not wanting to know too much. She had problems of her own and three daughters to feed.

She heard rumours of men and women dragged out of their beds in the middle of the night by the Gestapo, people shot in the streets, boys running off to join the resistance, and bombing raids up north. The last two years of life under the Nazi occupation had been one long cycle of survival, with dull routine punctuated by brief interludes of terror.

On the day that this story starts, September 25th, 1942, she had no idea how much worse things were yet to become.

It was three in the morning when Maria was woken by a pounding on the door. She groaned and propped herself up on her elbow. She opened one swollen eye and slurred, ‘Go away.’

A familiar wail filled the street and there was more pounding on the door.

‘Go back to bed. It’ll be over in a minute.’ Maria turned her back and pulled her pillow over her head. The banging increased, and her daughters’ cries became louder. Maria threw her pillow and blankets to one side, marched to the door, and unlocked it.

‘My God, are you trying to break my door down? Go back to bed and stop panicking.’

‘We’re going to be bombed,’ cried Eva. ‘We’ve got to go down to the cellar now.’

‘It’s just another false alarm. If we keep rushing down to the cellar every time it goes off, we’ll die of exhaustion anyway,’ said Maria, returning to her bed.

‘Mama, didn’t you hear the explosion? We’re all going to be killed,’ shouted Eva. Maria screwed her eyes shut and drew her blankets up over her.

Solveig started crying, ‘I don’t want to be killed. Mama, please come, please.’ She went back to her mother and shook her shoulders. ‘There’s nothing to worry about. Stop this rubbish now.’

‘I don’t want to go without Mama,’ said Solveig as she sat on the floor and rocked backward and forward. ‘Where’s Papa?’ She sniffed, crying and sucking her thumb.

‘It’s okay,’ said Inger, bending down and putting her arm around her.

‘We’ll be all right. You can come into my bed.’

‘Come on,’ said Eva. ‘For God’s sake, the house could be on fire, but if Mama said it was okay you would just sit and be burned. You are so stupid.’

There was another wail of the air raid siren. Eva covered her ears and ran out of the flat.

Maria lay awake and listened as the wailing died down. She mused about her three daughters. She must have loved them once. She closed her eyes and felt the familiar knot of anger in the centre of her chest. She tried to remember a time when she had been able to feel what she knew a mother should feel. Had she always been like this? Had it ever been possible to move without feeling as if she had lead weights crushing down on her? She sighed and returned her thoughts to her daughters.

Eva had just turned sixteen and was already considered a classic beauty with her long blond hair, intelligent blue eyes, and slim form. People said she was cold, but Maria knew it was just that she was wary of people she did not know. Inger, less than a year younger than Eva, was quite different with her halo of red hair, green eyes, and freckles on her upturned nose. She had a large gap between her front teeth and a smile no one could resist.

As for little Solveig, just ten years old, with her straight, mousy hair and face always full of worry, what was to become of her? She was always asking why and never satisfied with the answers. She had to be the plainest and most irritating child of all time. Maybe if, if only . . . Maria shut her eyes. She could not let herself think about the past.

She could hear Inger and Solveig laughing next door. What could they find to laugh about at this time of night? But then they were just children. Where indeed was Johannes? Solveig might miss him, but what did she know?