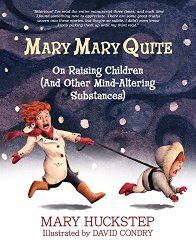 Raising Children is geared towards woman and mothers.  A pretty funny read that features many stories from a mother’s life and 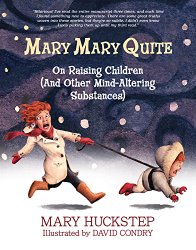 from married life.  Many woman will be able to relate to this book!  One story in the book talks about how a wife sends out her husband to get something at the store to get some spices from a store called “My isn’t this tasty, let’s have this again” store.  The wife listed all the names of the spices, exactly as they appeared on each bottle and she even included each empty bottle in a plastic bag so her husband could match them up at the store.  The wife was even creative and thoughtful and draw her husband a map detailing exactly how to get there and gave him money and sent him out the door.  So later, the husband comes back with a drill and six buckets of tar.    She thought, “Funny I didn’t know there was a scratch and Dent Warehouse near the “My isn’t this tasty store.”  The husbands’ response:  “My isn’t this tasty store must have moved, because he’d driven up and down the street where you told me it was, three times and still couldn’t find it.  The wife did some quick thinking and realized he hadn’t even looked at her map.

Another story:  MMQ:  ON Females and Prom.    Here there is a funny story how girls spend months planning for the prom. Girls have so much more to prepare for a prom than guys do!    “You got the dress, the nails, the shoes, the makeup, evening bag, “flawless hairdo and evening wrap.  The writer asks, imagine finding all that in 15 minutes in only one rental store?  Yeah Right!  The story ends:  “Be kind to the female in your midst during prom season, folks.  If a girl can survive prom unscathed, then there is hope for her future.  She just might make it through her marriage ceremony without trotting down the aisle on all-fours. ”

Other titles of stories include:  On Raising Children, On Getting Organized, On Pest Control, On Mother’s Day, On Teenage Driving, On Bedtime Crimes, On selling a house and much more!  A must read for all mothers and wives!  We can all relate to these many stories!  Why is it so hard for a husband to go to the store and get something that you need and where we woman even detail to the bone of how and where to find it?  Why make proms like weddings now a days?

My personal favorite that I can relate to with a five year old daughter:  MMQ:  On Bedtime Crimes.  “Each night, promptly at 8:00p.m, or whenever his bedraggled mother suddenly realized it was waay past his bedtime) his mom (our daughter) would announce, “It’s time for bed.”  This would elicit his prompt reply, “I’m hungry.”  And then all the fun would begin.  If Mom’s answer to his statement were, “I told you at dinner that you had to eat everything because there would be no snacks later on, ” then he would simply repeat his statement.  Or if the mom ignored his plea for being hungry, he would launch an all-out attack and holler-I am HUNGREEEE!  Or second offense:  weeping, wailing.  The story talks about when mom is out at a girlfriend’s house when bedtime occurs and Dad puts child to bed and child is an angel, listens, brushes teeth, puts away toys, puts on pajamas and climbs in bed.  Why?  “The real reason that children can manipulate their mothers and not fathers?”  Because the children know all their mothers’ fears.  This means they know all the buttons that they need to push, to make their mamas jump.   How?  Mothers tell them.  “Eat your dinner or you’ll be hungry later.”  “An apple a day keeps the doctor away.”  “Look both ways, or you’ll get run over.”

Reading this story, yep…definitely relate to.  I say to Alyssa, my five year old daughter, “Time for bed.”   Alyssa:  “But, I’m hungry.”  Or, “I’m thirsty.”  A little younger, she did the crying and screaming antic.  Alyssa had pajamas on, teeth brushed, story read to her and then you close the door, crying begins or then she lays in bed for two seconds and comes out to the living room and states that she can’t sleep.  Classic!  I love it!  This book is great!  Try for yourself today!Head on over to Amazon NOW!
MARY MARY QUITE: On Raising Children: (and other mind-altering substances)