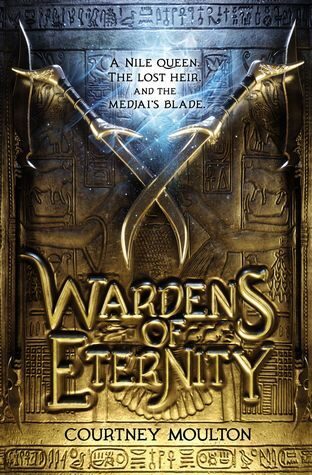 A NILE QUEEN
THE LOST HEIR
and the
MEDJDAI’S BLADE
The past meets the present when readers enter a world of mythology and history.  (COOL LOOKING COVER TOO)

Wardens of Eternity is an action-packed adventure ,with not only Egyptian mythology but magic, romance, betrayal, and battles with the gods This is the story of the ancients and the main character named ‘Ziva’ .Ziva has been living in the city and has few friends, but she is feeling she needs to find more about herself. She starts to learn these things on a cold night in a strange manner.  Ziva finds comfort as the story progresses and learns in more particular ways about herself and the powers she has used somewhat in her old life and how to use them properly. 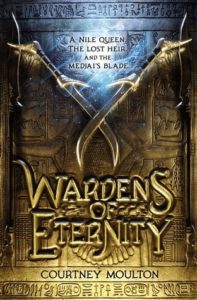 things that are related to each other in more ways than one.  The author Courtney Moulton uses description very well in word pictures the reader will see in their minds.  Some of the words, as in ‘kriosphinx‘ and the powers that all the characters from Ziva to Nasira to Cyrene exhibit to help whomever is involved.
This book ‘Wardens of Eternity’ is a good story for an English literature class to teach how history and even ancient history makes a good story.  Courtney Moulton is a writer who writes about how important family and heritage is to all of us.  She has a way of writing that makes readers want to learn and share our knowledge in our many ways.  It is really about learning what makes us different and the same.  This is a novel that will entertain and teach readers the basics of understanding the diversity of the world.

Ziva has one memory of her parents, made the day they abandoned her on the streets of New York City when she was three years old. They left her with only a memory and a promise that she had a great and terrible destiny.

Fifteen years later, Ziva discovers that destiny includes powers that she doesn’t understand and can barely control. Her magic attracts vicious, otherworldly monsters, and eventually compatriots to help her fight them. Sayer and Nasira know the secrets Ziva doesn’t; that Ziva is descended from Egyptian royalty and in possession of ancient magic passed down from the time of the gods. They promise to teach Ziva to control her magic and to give her the family she’s always yearned for.

But trouble is brewing in the world around them; darkness is descending on Hitler’s Germany, threatening World War II. As the last heir of a revered Egyptian queen, Ziva is the only one with the power to prevent another costly global conflict. As Ziva navigates her newfound abilities and makes a connection with Anubis and other Egyptian gods, the Nazis are hunting for the ultimate weapon, and Ziva has caught their interest.

Courtney Allison Moulton lives in rural Michigan with her family, horse, donkey, and a flock of spoiled sheep. When she isn’t studying ancient civilizations or writing about magic and monsters, she’s busy with farm chores. Her acclaimed debut novel ANGELFIRE was published when she was just 24 years old. For more information about Courtney, visit her online at courtneyallisonmoulton.com. 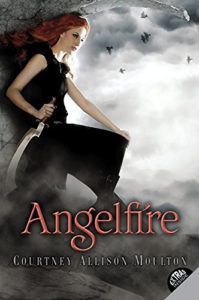 Ellie can’t shake the terrifying dreams about monstrous creatures that are hunting her, killing her. Then she meets Will and feels on the verge of remembering something just beyond her grasp. His attention is intense and romantic, and Ellie feels like her soul has known him for centuries. When they meet on a dark street at midnight, Will awakens Ellie’s power, and she knows that she can fight the creatures that stalk her in the grim darkness. Will holds the key to Ellie’s memories, whole lifetimes of them, and she can no longer pretend anything was just a dream.
Tweet
Spread the love