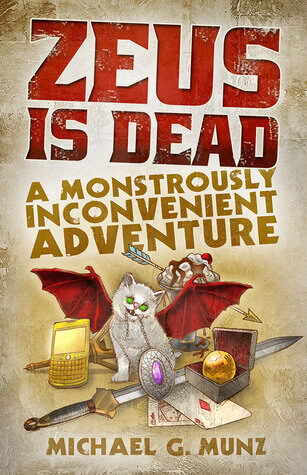 Mr. Micheal G. Munz  ( the author) must be one crazy Dude! Not since I read Catch 22 in high school have I read anything so ridiculously funny. When I say funny I mean Hilarious on so many levels.When this book attacks your sense of humor or that funny bone of yours it’s (To steal a line from the book itself) well it’s ” SHOCK and AWE WITH A CHERRY ON TOP!” From simple pun’s and stand-up type one liners to drawn out descriptions of a character or storyline.This guy Munz will actually stop the story in mid sentence and talk to the reader, whether to explain something or maybe a little idle conversation that has absolutely nothing to do with the story.Technically I think at least in films and theater they call it breaking the fourth wall- picture Woody Allen in Annie Hall or maybe Meta-fiction. But Munz takes it to another level . This style of writing only adds to the book. 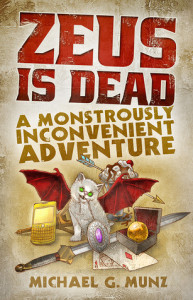 I must admit I know very little of Greek Mythology , the god’s or  who and what they were.Luckily in the back of the book is a Mythological “who’s who” of all the God’s,Goddesses, Muses,Fates and Erinyes and of course a helpful note that Elvis is/was in fact not a GOD! I do now understand what a Muse is.I also realize now that this group of Gods are probably the most dysfunctional family in history.

So let’s  start with Part One :

Zeus Is Dead, and Those who Prophet …

The immortal  Zeus is murdered (did I say Immortal?) well this opens up a wealth of opportunities for the other Gods.You see being the king of the Gods ,The boss, the head Honcho 3,000 years ago Zeus forbid the Gods anymore contact with the Mortals of Earth. So now with Zeus out of the way the Gods return to earth in a big way. It’s now 2009 and…

THE GODS ARE BACK. DID YOU MYTH THEM?

“The question of who killed Zeus is unimportant. Trouble neither us nor yourselves further with this. It is only for you to know that the gods of Olympus have returned.”

And it takes off from there. A mythological Murder mystery at it’s finest. Who really  did it and Why?(Ares will admit to anything)  It seems the only one truly loyal to Zeus is Apollo. So with the help of the Muse Thalia and a couple of mere mortals a T.V. Producer named Tracy and a lovestruck smart-ass guy named Lief ( he’s got the hots for Tracy) blame Aphrodite . Their off on their quest to find some answers battling  among others along the way Flying poison spitting Bat winged Kitties , Neo-Christian Ninja squads, egotistical trash-talking God’s and three headed monster dogs in need of a good grooming.

Throughout, the story is unique , original with a strong base of mythical knowledge(not me the author) I love the main characters and their development the interaction between Tracy and Leif.The portrayal of the Gods were funny and original. Of all the characters I thought Leif was my favorite until Baskin arrived.Just wait till you meet him,and the Idiot Ball! I’m convinced that I’ve known people that had it in their possession.

This book is a must own if you appreciate great humor,witty writing, non-stop giggles and laugh out-loud lines page after page.Get this book.Click IT below.

Now I know we are all different sorts but of all the passages in this book the one I’ll most remember is the following only because I spent 36 years at a fortune 500 company and it really hit my so called funny bone.

“No!” the redhead cried. “You don’t understand! You cannot stand
against the Erinyes!”
Jason rushed to reset the crossbow. “First birds, now flying redheads.
What’s an Erinyes? Leif! Quarrel!”
“Oh, hell,” Tracy whispered in what seemed to be recognition.
“Jason, she’s right, we have to run!”
“The way out is clear!” yelled the redhead. “You can get out! Go!
Go! Go! Nobody listens! Why aren’t you going? Are you an executive?”

08/13/2014 –     (I have actually seen some bad reviews of this book and all I can say is ??????? what a sad humorless life some people must lead )give me Monty Python ,Woody Allen and sadly Robin Williams any day) oh and this MUNZ DUDE
So buy the book–I COMMAND IT! sorry after dealing with those gods well you know…

-We received this book for a fair and honest review- 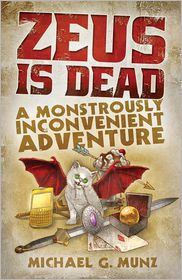 About the Author of ZEUS Is DEAD

An award-winning writer of speculative fiction, Michael G. Munz was born in Pennsylvania but moved to Washington State in 1977 at the age of three. Unable to escape the state’s gravity, he has spent most of his life there and studied writing at the University of Washington.Michael developed his creative bug in college, writing and filming four exceedingly amateur films before setting his sights on becoming a novelist. Driving this goal is the desire to tell entertaining stories that give to others the same pleasure as other writers have given to him. He enjoys writing tales that combine the modern world with the futuristic or fantastic.Michael has traveled to three continents and has an interest in Celtic and Classical mythology. He also possesses what most “normal” people would likely deem far too much familiarity with a wide range of geek culture, though Michael prefers the term geek-bard: a jack of all geek-trades, but master of none—except possibly Farscape and Twin Peaks.

Michael dwells in Seattle where he continues his quest to write the most entertaining novel known to humankind and find a really fantastic clam linguine.