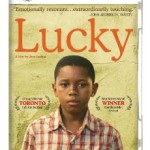 “Sometimes things happen so fast you don’t get a chance to say what’s really important” says Lucky’s (Sihle Dlamini’s) mother Singile (Jabu Tshabalala) in a tape she’s left her son when she’s dying of AIDS (in the DVD release of the movie Lucky by Film Movement on June 4, 2013). Lucky himself is a young boy in a Zulu village in South Africa who sets off for the city of Durban to find his uncle (James Ngcobo), to whom Singile has entrusted money for his care and schooling.

But, as we all know, sometimes life doesn’t work out as planned. Lucky is eager to see the big city filled with cars, where he thinks that he will become a man (although he doesn’t really know what this will entail). But Lucky’s uncle squanders Lucky’s money on the proverbial wine, women and song lifestyle because he doesn’t really care about him.

Resourcefully Lucky turns to an elderly East Indian woman, Padma (Jayashree Basavaraj) whom he calls Granny and who lives in his uncle’s building. Lucky brings her fresh water and she lets him play the tape from his mother on her recorder, and despite being prejudiced against black-skinned people her heart reaches out to this poor orphan boy. She tries to adopt Lucky but is foiled by the uncle, and so she enlists the aid of a taxi driver Bongile (Mdo Duzi) and pays him to drive her and Lucky on a search for Lucky’s father. But Lucky runs away and tries to pretend he’s a typical student at a school, for one day playing soccer and learning about Nelson Mandela, before he’s thrown out by the principal (just like so many other boys who try this every month, the principal tells Lucky).

We learn that Padma has lost her own young son long ago (explaining why she goes to such extreme lengths to help Lucky). At first Lucky refuses to believe that his father is alive because his mother has told him that his father is dead, but he learns that even the best of adults lie sometimes, for their own reasons. The end of the story is not what we would expect.

There could be no better actor than Sihle Dlamini to play the part of a boy bereft of all the love he’s ever had who’s still young enough to think that he’ll find an adult substitute who will cherish him. Jayashree Basavaraj, well-known as an actress and singer in India, is absolutely believable as a lonely and aging woman who tries to help Lucky better himself and find his father. Shifting painfully through the many emotions she feels she remembers her own life and its greatest loss. That Lucky and Padma should form such a strong bond that must inevitably be broken is one of life’s cruel twists and turns. The topic of AIDS and its resultant orphans in great quantitude (and what it means to so many individuals) is strongly brought home to us.

Director Avie Luthra, who received many awards for his precedent short (also named Lucky) is British, but his film is very South African, mixing not only the cultures of the nationalities who live there but personifying the hope and blind faith of the young who must somehow survive (and pointing out how some choose looting and others strive to make a better life for themselves). Avie Luthra notes that at a funeral he saw “a small 10-year-old boy weeping into the grave of his recently buried mother. The moment was as casual as a child playing with a toy. It was nothing but a brief glimpse into his pain and then it was gone. But the future of that boy struck me deeply and made me wonder how he links into all the street children and homeless boys you see at traffic lights in South African cities.” I recommend this film highly, as it will bring your world consciousness (and conscience) into sharp focus.

Christina Zawadiwsky is Ukrainian-American, born in New York City, has a degree in Fine Arts, and is a poet, artist, journalist, critic and TV producer. She has received a National Endowment For The Arts award, two Wisconsin Arts Board awards, a Co-Ordinating Council Of Literary Magazines Award, and an Art Futures Award, among other honors. She was the originator and producer of Where The Waters Meet, a local TV series created to facilitate the voices of artists of all genres in the media, for which she won two national and twenty local awards and a Commitment To Community Television Award. She is also a contributing editor to the annual Pushcart Prize Anthology (and has received one herself), the recipient of an Outstanding Achievement Award from the Wisconsin Library Association, has published many books of poetry and has had poetry and fiction in hundreds of literary periodicals. She has reviewed music for Music Room Reviews, films for Movie Room Reviews, Movie Scribes, and FilmSay, and is currently reviewing books and films online for Book Room Reviews at www.bookroomreviews.com while also showing artwork professionally.