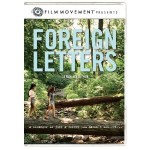 Foreign Letters, released on DVD by Film Movement on July 20, 2012, is about friendship transcending cultural and socio-economic differences. Ellie (Nora Rotstein), age 12, who has immigrated from Israel to Connecticut in the USA so that her father (Vdi Razzin) won’t be forced into the war against Jordan, feels a huge sense of culture shock. In America they give away free bags at the supermarket and free pencils at school, which also has a “free restaurant” (the cafeteria). Ellie’s mother (the director herself, Ela Thier) lights a candle every Friday and mourns for her brother, who did get killed in the war against Israel.

But Ellie has a life-long friend, Shlomi (to whom she writes long letters about America, and who is duly amazed) and misses her fiercely. At school Ellie doesn’t understand what’s being said and she very slowly and painstakingly tries to learn English. The popular girls at school tease her unmercifully about her differences. She notices one girl who always sits alone, reading, Thuy (Dalena Le),

and tries to strike up a friendship with her. Thuy and her family came to America when she was in the fourth grade, so she now speaks English fluently.

After a series of misadventures Ellie and Thuy do become best friends. Thuy is ashamed that her family lives in an apartment and not in a home like everyone else, and she has to take care of her brothers and sisters while her parents work long shifts at a factory. Both girls are different, and Thuy stands up to the popular school girls when they criticize Ellie.

A typewriter that she buys at a rummage sale with her babysitting money helps Ellie learn English. She and Thuy talk about boys and secrets and learn how to ice skate together. Thuy teaches Ellie Vietnamese dancing as they dress up in exotic robes and practice on the roof-top of Thuy’s apartment building.

Director Ela Thier vividly captures what it’s like to be an innocent young child, whether it’s showing Ellie and her younger brother (Daniel Bahr) gleefully bouncing on a bed together or trying to watch television when they still don’t understand English very well. Thuy and Ellie make shrinky-dinks with both their initials on them to cement their friendship. Eventually Ellie, not really understanding how Thuy’s parents are poor and that Thuy has many more responsibilities than she does, feels that Thuy is not as good a friend to her as Shlomi was, and breaks off the relationship. What she has to do to bring them back together is a painful sacrifice on her part.

What’s amazing about this film is that it’s true, and really happened to director Ela Thier, who after 30 years once again met up with the girls that Shlomi and Thuy characterized in the movie. Special Features also provides an interview with Ela and the Vietnamese woman who was her best friend years ago. A truly heartfelt and absolutely delightful film, rich with both comic and dramatic episodes, that I would recommend to anyone!

Christina Zawadiwsky is Ukrainian-American, born in New York City, has a degree in Fine Arts, and is a poet, artist, journalist and TV producer. She has received a National Endowment for the Arts Award, two Wisconsin Arts Boards Awards, a Co-Ordinating Council of Literary Magazines Writers Award, and an Art Futures Award, among other honors. She was the originator and producer of Where The Waters Meet, a local TV series created to facilitate the voices of artists of all genres in the media, for which she won two national and twenty local awards, including a Commitment to Community Television Award. She is also a contributing editor to the annual Pushcart Prize Anthology, the recipient of an Outstanding Achievement Award from the Wisconsin Library Association, and has published four books of poetry. She has reviewed music for Music Room Reviews, films for Movie Room Reviews, Movie Scribes, and FilmSay, and is currently reviewing books and films online for Book Room Reviews at www.bookroomreviews.com and showing artwork professionally.