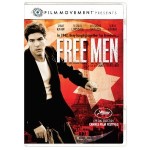 Free Men, a film by director Ismael Ferroukhi released by Film Movement on October 2, 2012, has won many awards and was an Official Selection at the Cannes, Toronto, and Abu Dhabi Film Festivals. Exploring the nature and relativity of freedom (is being alive but running from the Nazis because you’re Jewish being free? Is being a poor Algerian, Younes -Tahar Rahim – forced to sell items on the black market “more” free?), in this film Younes struggles to survive but is politically ignorant of what’s happening around him in

Vichy Paris. Younes meets Salim Halal (Mahmud Shalaby) , who is Jewish but pretending that he isn’t and is trying to establish himself as a singer in Parisian nightclubs (especially the Andalusia Club), and Salim’s beautiful voice and character awaken in Younes a desire to join the fight for freedom.

It is true that in real life Ben Ghabrit (brilliantly performed by Michael Lonsdale), a rector at the Paris Mosque, helped Jews to escape the Nazis and provided them with false identification papers, which is a little-known fact about that era. Director Ismael Ferroukhi originally read an article about the Paris Mosque helping members of the Resistance and the Jews during World War II, and then he discovered that a community of people had immigrated from North Africa before the war and worked in factories and Arabic cabarets in Paris. Ferroukhi then learned about Ben Ghabrit, “a generous but complex and deeply religious man” who was also interested in music and art. Ferroukhi writes, “Then a friend of mine told me that Ben Ghabrit saved his Jewish grandmother during the war,” and his friend also said, “If Ben Ghabrit did not exist I would not be here today.” Thus Free Men informs us about Ghabrit, and Younes symbolizes one of the many Algerians and North Africans who came to Paris at a devastating time and tried to eke out a living there, often becoming ill and unable to work.

In the film Younes is picked up by the Paris police for his black market activities, and the police want him to become an informant, spying on the Paris Mosque; in exchange they say they will not send him to jail. Younes begins to do this but soon comes to understand that Ghabrit’s life-saving work is intensely important,

especially after he is asked to hide two very young Jewish orphans, a brother and a sister, who are innocent and very scared.

Tahar Rahim has been likened to a young Robert DeNiro, but at least in this film (he was nominated for an Academy Award for The Prophet) he is more reserved and less loud and eccentric than DeNiro was in his early roles. Rahim does carry with him a kind of pondering power, and he definitely has a presence, especially when he, as Younes, commits an act of bravery and revenge towards the end of the movie. At first Younes is an outsider, scratching to get by as he helps his cousin sell black market products, but by the end of the film Younes is part of a rebellious group that has risen up against the Nazis and their unbelievable actions. “We want to fight for our freedom but there’s no freedom without sacrifice. Down with Colonialsim! Long live Freedom!”

Free Men is a worthwhile film that is fodder for many a philosophical discussion which presents to us a little-known group who helped the Jews against the Nazis. Younes is quiet and observant as his character transforms and he becomes a man of courage and daring, finally caring about what is right.

Christina Zawadiwsky is Ukrainian-American, born in New York City, has a degree in Fine Arts, and is a poet, artist, journalist, critic and TV producer. She has received a National Endowment For The Arts award, two Wisconsin Arts Board awards, a Co-Ordinating Council Of Literary Magazines Award, and an Art Futures Award, among other honors. She was the originator and producer of Where The Waters Meet, a local TV series created to facilitate the voices of artists of all genres in the media, for which she won two national and twenty local awards, including a Commitment To Community Television Award. She is also a contributing editor to the annual Pushcart Prize Anthology (and has received one herself), the recipient of an Outstanding Achievement Award from the Wisconsin Library Association, has published four books of poetry and has had poetry and fiction in hundreds of literary periodicals. She has reviewed music for Music Room Reviews, films for Movie Room Reviews, Movie Scribes, and FilmSay, and is currently reviewing books and films online for Book Room Reviews at www.bookroomreviews.com while also showing artwork professionally.

Top 10 kids movies based on books