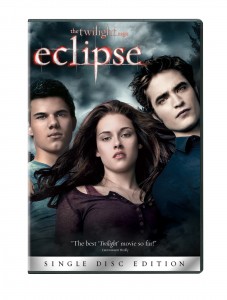 We were excited to experience the third Twilight movie when Twilight Eclipse released on DVD December 4th from Summit Entertainment.

The third film stars the same cast including the love triangle of Kristen Stewart (as Bella Swan), Taylor Lautner (as Jacob) and Robert Pattinson (as Edward).

While the film centers on Bella’s challenging decision of whether join Edward in immortality or consider a different plan with Jacob, Twilight Eclipse has more action than romance relative to the other stories. This is why Eclipse was my least favorite book in the Stephenie Meyer saga.

To learn more about the film and to get a recommendation, read the Movie Scribes Twilight Eclipse DVD Review!