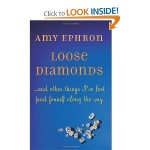 “When I was eight, my friend Jenny and I invented a game. We’d both read The Secret Garden. Next door to my house has a 20s Spanish house edged by a stone wall with an ornate iron gate, hidden from the street. One day, armed with silver spoons that we imagined we would use to dig up weeds and uncover baby crocuses, we unlatched the gate and sneaked into the garden next door….it was like something you would find in a villa in Puerto Vallarta…there were ornate hand-painted Mexican tiles in patterns in the walls and a tiled terrazzo floor (not a silly lawn like we had next door) and a bigfountain that was peaceful and magical which we instantly deemed a wishing fountain.”

Amy Ephron’s life is a series of adventures. Even a burglary in her Los Angeles home is an adventure: she screams hysterically at the police that she wants her screenplay back (from a stolen computer) and not only does the police photographer tell her privately that he’s a Buddhist and is praying for her, but she receives an email from someone who thinks they’ve bought a stolen computer, and later a copy of the computer’s hard drive “appears” in her mailbox. As a child in “a different time, innocent and guileless,” Amy is drawing in colored chalk on her sidewalk and meets Marion, who asks her to visit a lonely man for whom she works – and Amy follows Marion across the street and meets The Birdman, who own many parrots and a beautiful home where “the art and objects seemed to come from around the world, not to mention the birds, and I imagined (because even then I had an overactive imagination) that the man who owned the house was a retired diplomat.” He had a backyard aviary with “toucans and flamingos and cockatiels that flew from branch to branch, peacocks, lots of them, that ran around wildly….and there were tiny songbirds: wrens, warblers, canaries, and kiskadees, the bright colors of the pastel chalk I’d left on the sidewalk across the street.”

Amy Ephron even spent an afternoon with Lynnette Squeaky Fromme (of the Charles Manson Family fame) when she interviewed her on the Spahn Ranch after Charlie, Patty, Suasan and Leslie were already in jail in 1971. Amy was in Los Angeles to cover the trial, and at the time Squeaky “wasn’t under investigation for anything….I was 19 and didn’t have a very good handle on danger myself” so she had a friend drive her out to the ranch. Squeaky had been a professional dancer as a child and “There was an openness to her that was disarming.” After arguing with an abusive father Squeaky was sitting under a street lamp in Venice, California, reading a book, when Charlie found her, and because “Charlie was the the first person who ever told me I was pretty” she “went with him.” Amy writes that she and Squeaky had a strange talk about ecology and “there was a look of sadness somewhere between her eyes and her cheekbone….that had been there for a long time and might be always.” Weeks later, Squeaky showed up on the courthouse steps with an X carved into her forehead, and four years later, after pointing a Colt .45 at President Gerald Ford, she was sentenced to life imprisonment.

Actively intelligent and utterly descriptive, Amy Ephron always makes you feel as if you’re right there with her feeling what she’s feeling and seeing what she’s seeing, whether it’s a big tear-drop diamond or a man confessing to her “Going to explode. You’ll see,” as they’re boarding a plane. Her essays on “mistake shopping” and trying not to be a psychic are entertaining, and most of us can identify with the former. One begins to think that Amy Ephron’s mind is always at work, asleep or awake, and what would it be like to have that kind of brain power? Both interesting and funny, Loose Diamonds is a sincerely-written book (by a person who’s very involved with other people), that you definitely shouldn’t miss.

Loose Diamonds…And Other Things I’ve Lost (And Found) Along The Way, published by William Morrow on September 6, 2011, 166 pages.

Christina Zawadiwsky is Ukrainian-American, born in New York City, has a degree in Fine Arts, and is a poet, artist, journalist and TV producer. She has received a National Endowment for the Arts Award, two Wisconsin Arts Boards Awards, a

Co-Ordinating Council of Literary Magazines Writers Award, and an Art Futures Award, among other honors. She was the originator and producer of Where The Waters Meet, a local TV series created to facilitate the voices of artists of all genres in the media, for which she won two national and twenty local awards, including a Commitment to Community Television Award. She is also a contributing editor to the annual Pushcart Prize Anthology, the recipient of an Outstanding Achievement Award from the Wisconsin Library Association, and has published four books of poetry. She currently reviews movies for and , music for , and books for .

The Hauntings of Cold Creek Hollow by Alexie Aaron