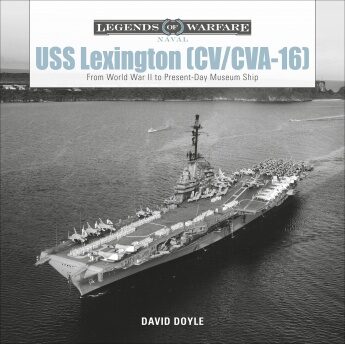 245 years ago today – The Battle of Lexington & Concorde (1775) – the first military engagements of the American Revolutionary War. They marked the outbreak of armed conflict between the England and its thirteen colonies in America.
The first United States warship was a brigantine bought in1776. It’s name was The Lexington
From Wikipedia

Originally named the Wild Duck, Abraham van Bibber purchased her for the Maryland Committee of Safety, at St. Eustatius in the Dutch West Indies in February 1776. She soon got underway for the Delaware Capes and reached Philadelphia, Pennsylvania 9 March with a cargo of sorely needed gunpowder for the patriot forces.[1] Four days later the Marine Committee purchased Wild Duck, renamed her Lexington after the Battle of Lexington (the first battle of the war), and turned her over to Wharton and Humphry for fitting out

The last USS Lexington (CV-16), a member of the famed Essex class of carriers that made up the backbone of the US Navy’s carrier force in WWII, served its nation from WWII into the 1990s. She was Commissioned in1943 .With almost a half-million arrested landings recorded, arguably more naval aviators have landed on its decks than on any other aircraft carrier in the world. Scarred in battle during WWII, the Lexington earned considerable distinction in that war, participating in the sinking of over a million tons of enemy ships and downing hundreds of Japanese aircraft. The history of this famed vessel is presented through over 200 photographs and accompanying narrative. Presented in this extraordinary book titled…

These photos, coupled with descriptive and informative captions, put the reader on the deck of this historic warship throughout its history. From the Construction in 1942 to it’s present day resting place. On January 29 1992 The USS Lexington sailed it’s last cruise and moored at Corpus Cristi Texas 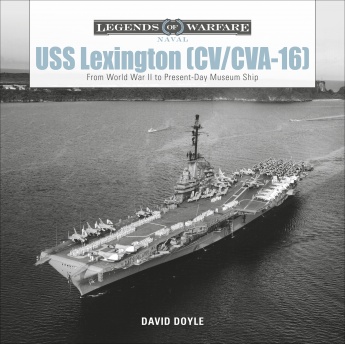 and is now the USS Lexington Museum.
When I first heard of this book I thought is was about the Lexington that was lost in the Battle of the Coral Sea.I really had no Idea another was Carrier by that name built after the first was sunk.
This Ship though has quite a history. For those of you that enjoy Navel history. Get this book. Learning about the history of this ship was very enlightening. It is a pictorial history not just of the ship itself but of the battles it fought in World War two in the Pacific Theater.
After the war you can see it coming home to the States.It was decommissioned for a while. Over the years the picture show the improvement of it’s modernization. The role it played in later years as a training vessel. Finally the beautiful Color photos and descriptions as it sits in peace as the Museum it is now.
This is something I will definitely be putting on my bucket list to see if I ever get to Texas again.
You can find this book on Amazon

David Doyle’s earliest published works appeared in periodicals aimed at the hobby of historic military vehicle restoration. By 1999, this included regular features in leading hobby publications, appearing regularly in US, English, and Polish magazines. Since 2003, over 125 of his books have been published. Broadening his horizons from his initial efforts concerning vehicles, he soon added aircraft and warships to his research topics

More books by this author

Top 10 Books on Cars and their History