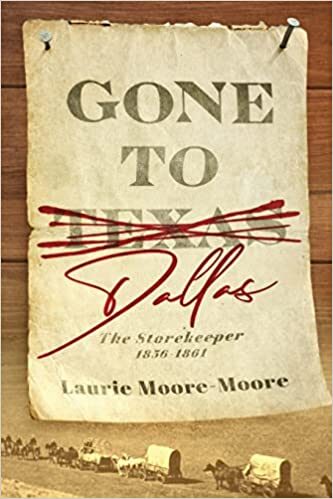 Laurie Moore-Moore ‘Gone to Dallas and a voyage back in time to see how things were different and yet the same.’  Laurie Moore-Moore has written the novel ‘Gone To Dallas The Storekeeper 1856-1861’ about how the character of Sara and her voyage by

wagon train at the time right before the Civil War with all events that were going to happen to the country.  This is the story at the start of a major city one day in the future.  Sara is the storekeeper that has many decisions to make in dealing with the many relationships that are and will affect her life and others and still living the way she wants.Laurie Moore-Moore has written a novel for young adults and adults who like American history and relationships.  From the scenes of the wagon train voyage to the building of her first store to the very beginnings of a town of big buildings and that will become a major metropolis in the future.  Laurie as well as Sara has described the era and the life of a growing time for us all.  Laurie is an author that teaches survival techniques that are both physical and emotional.  Laurie’s description of how Dallas was physically formed from the rivers to the praires were made visible along with all the real and imaginary characters from Sara and Morgan and all the other characters that share their own stories as part of a bigger story of country and state.‘Gone to Dallas’ could be used for a Language Arts/History-Social studies lesson for a middle school/high school classroom.  Just discussing the settings, characters and theme of the book would be good for the Language Arts, and for a Social studies lesson could be a geography with the lay of the land from the wagon train trip to setting up the town.

Climb aboard an 1856 Dallas-bound wagon train and join a plucky female protagonist for the journey of a lifetime in Laurie Moore-Moore’s richly entertaining new book, Gone to Dallas, The Storekeeper 1856-1861. Far from your average historical novel or western, Gone to Dallas is a compelling tale of migration, betrayal, death and dreams—peppered with real people, places, and events. With a cast of interesting characters and more bumps and hazards than a wagon trail, Gone to Dallas tells the unforgettable story of a formidable frontier woman in the context of true Texas history.

It had seemed so romantic — and now so long ago — when Morgan Darnell courted Sara in Tennessee, finally convincing her they should marry and join an 1856 “Gone to Texas” wagon train traveling along the “Trail of Tears,” through Indian territory, and across the Red River into Texas.

In a twist of fate, Sara arrives in Dallas a 19-year-old widow, armed with plenty of pluck, and determined to open a general store in the tiny settlement of log cabins on the Trinity River. Standing in her way as a young woman alone are a host of challenges. Can Sara (with the help of her friends) pull herself up by the bootstraps and overcome uncertainty, vandalism, threats, and even being shot?

Follow Sara as she strives to create her store (Sara’s Mercantile Emporium) while living Dallas’ true history — from the beginnings of La Réunion (the European colony across the Trinity) to a mud and muck circus, a grand ball and the mighty fire that burns Dallas to the ground. Dallas is a challenging place, especially with the Civil War looming.  Even with the friendship of a former Texas Ranger and Dallas’ most important citizen — another woman — is Sara strong enough to meet the challenge? The risks are high. Failure means being destitute in Dallas!

How to Find the Best Barcode Scanner Online for Libraries