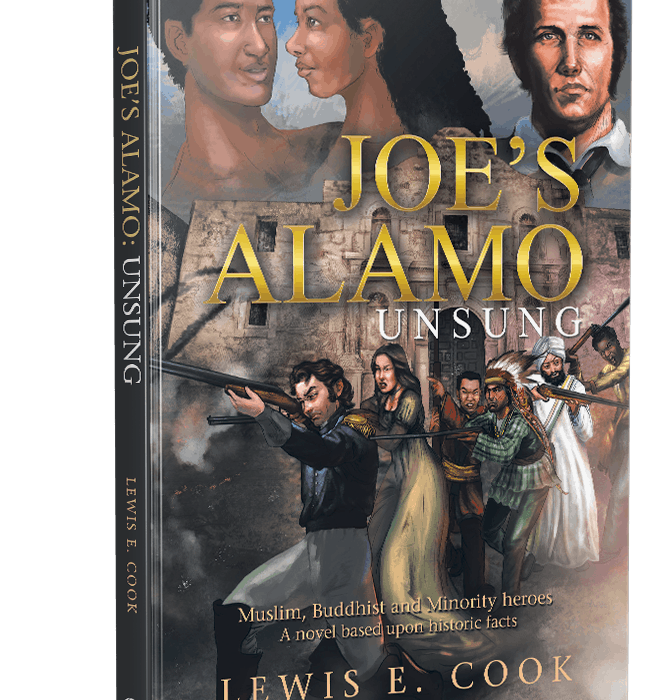 ISBN:  978-1-5320-2072-8  (HC)
ISBN:  978-1-5320-2071-1  (e)
We all see our American history in different ways and ‘Joe’s Alamo Unsung’ written by Lewis E. Cook shows and tells readers another view of this particular historical moment in American history.  This account of the Alamo is seen through the eyes of one time slave now freeman.  ‘Joe’s Alamo Unsung’ is a novel about how Texas became a part of the United States.  Joe, who is the main character who happens to be an ‘educated’ black man and learns other things from characters like Davy Crockett, Sam Houston, Santa Ana, as well as all the others to be able to say “Remember the Alamo!”

This is a novel that could be used as a supplemental reading assignment to describe Texan-Mexican history.  Topics that could be discussed is the actual battle of the Alamo and other classes could also discuss the lives of the famous characters of the book starting with Davy Crockett and the other US leaders then on to the Mexican side with Santa Ana and those other characters.  One question that is on the literary side would be ‘Is this book fiction or non-fiction or a little of both?’ after reading the final chapter. The battle scenes were vivid and the reader feels that they are present during the action.
Lewis E. Cook has written a story that is purely entertaining as well as educational to a point.  The reader will not believe that they are reading about a true historical event with all the sideline stories of the female story line, as in Emily’s story when she called him her ‘Slow Joe’.  Lewis is a creative writer with a flare of the past.  This could also be a book used in classrooms to review and research procedures for the teachers could have the students check for historical accuracy of the book after reading ‘Joe’s Alamo Unsung.’

Remember the Alamo! is a slogan known worldwide for courage in battle against overwhelming odds. In that historic stand less than two hundred volunteers fought against five thousand soldiers for thirteen days. According to Joe, the only male survivor, all races and religions fought and died there. Lead by William Travis,Sam Houston, Jim Bowie and Davy Crockett the Alamo defenders bravely made the ultimate sacrifice while suffering ever darkening days. Joe was severely wounded during the massacre but allowed to live because he spoke Spanish and could translate the terrifying words of the army general who relentlessly attacked the Alamo. General Antonio Lopez de Santa Anna wanted the Alamo to become symbolic of hopelessness and certain death for anyone that opposed his reign of terror. That did not happen due to efforts of Susana Dickinson and Joe, a slave. This novel is inclusive of all races and religions just as Joe described. Its characters reflect the real personalities of Alamo defenders. It includes recently discovered facts about William Travis, Joe, Susana Dickinson, Davy Crockett and John, who was pitifully listed among the dead only as a black boy.

Lewis E. Cook practiced civil litigation, probate and criminal law. He worked as an immigration attorney for a former U.S. Immigration Commissioner, as a banking and finance attorney in Dallas and was a Texas assistant attorney general. Always a writer at heart, he was raised in Arkansas and now lives in Houston.