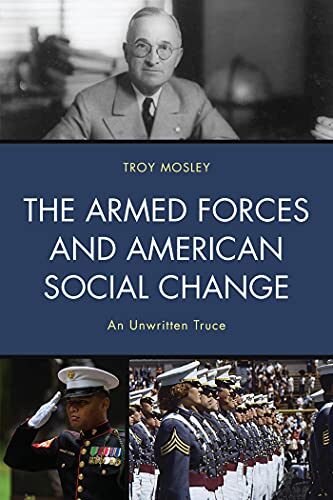 The Armed Forces And American Social Change  An Unwritten Truth

This is a very illuminating piece of writing, learning and history. ‘The Armed Forces and American Social Change An Unwritten Truth’ is written by a man by the name of Troy Mosley.  This would make a great textbook for a Human services, American history, and/or even a Counseling course.  This is a book that covers military history and society as part of a certain community of people in the whole community.

Troy Mosley has written a well-detailed reference book that teaches the readers how our country accepts various people and cultures throughout the years.  My favorite parts of this book were the sections of early military history as well as all the graphs that are presented throughout the book that are well-depicted and did explain the text that they illustrated.  This is also a book that did give the reader a new way of looking at the veteran no matter what gender, race or creed that they happened to be at any time during history.  Troy has written this book for the non-history readers as well as for history buffs.  He has made want to learn more about this subject and learn how to make the present better and hopefully into the future by learning about the past and teaching the acceptance of others. 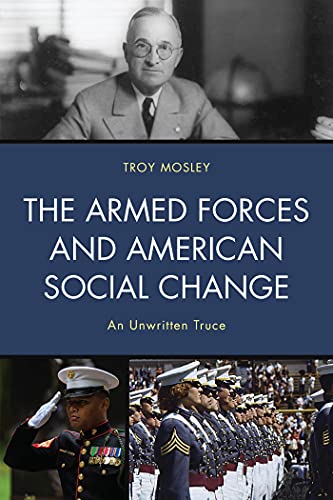 The Armed Forces and American Social Change is a powerful depiction of black Americans’ struggle for equality told through the lens of uniformed military service. Troy Mosley uses superb storytelling, personal vignettes, and historical examples to show how millions of Americans have lifted themselves from oppression through opportunities gleaned from military service. Collectively, these efforts exerted positive outward pressure on American society, which by and large has resisted social change. One unique aspect of combat is that rarely are Americans more equal than when thrust into harm’s way. It has been said there are no atheists in combat; similarly, racism, sexism, and homophobia quickly go by the wayside when under enemy fire. Yet in the 19th century and well into the 21st, America’s military policies regarding the use of manpower could best be described as an awkward attempt to balance the requirement to win the nation’s wars while supporting a socio-political caste system. President Harry Truman signed Executive Order 9981 on July 26, 1948 in response to police violence perpetrated against black veterans. His actions broke this trend and set the military on the path toward true meritocracy

About the Troy Mosley

Troy is a retired Army Lieutenant Colonel and 20-year veteran who grew up in Jacksonville Beach, FL and graduated from Duncan U. Fletcher High School in 1985. He attended Florida State University for two years before transferring to Florida A&amp;M University (FAMU) where he graduated with a B.S. in Psychology and earned his commission through FAMU’s ROTC Program. Troy held various military assignments in his 20-year career. Troy taught medical support and evacuation at the United States Infantry Center and School, Fort Benning, GA before being selected to attend Baylor University’s Master of Health Administration Program through the Army’s Advanced Civil Schooling Program. Troy completed his administrative residency at Landstuhl Regional Medical Center where he was the lead project officer for the first-ever Fisher House dedicated outside the continental United States. Troy served as the Executive Officer for the 212th Mobile Army Surgical Hospital during Operation Iraqi Freedom in 2003. Troy served as the Administrative Director, Department of Surgery, Walter Reed Army Community Hospital before being selected to be the Army Surgeon General’s Executive Assistant. Troy served as COO for Weed Army community Hospital (WACH) in 2009 where he led the Hospital to the best Joint Commission (TJC) Accreditation score in the Army that year. His efforts were instrumental in securing funds for a $300 million new hospital construction project at Fort Irwin, CA, the DoD’s first solar-powered

The Day That A Ran Away by B.C.R. Fegan