The House on Creep Street ; A Fright Friends Tale by the BLOOD BROTHERS Halloween Ghost Story 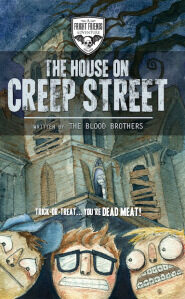 Looking for a Halloween Ghost Story ?

The House on Creep Street? Yeah so what about it? That old broken down house that every small town has.Haunted? Ghost?Those are just old tales told by adults to scare little kids right? Joey the boy obsessed with ghost stories and scary movies plans to get to the bottom of it.
With only four days till Halloween Joey can’t convince his two twelve year old buddies to go Trick or Treating.So with a bit of thought he convinces his two twelve year old pals Kevin and Barry to explore the House on Creep 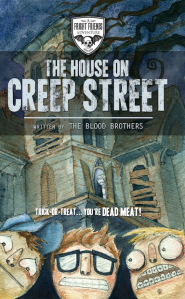 Street on Halloween Night.. Enter the Fright Friends,Joey thought that one up.

A creepy,scary adventure by three twelve year old boys testing their courage and toughness. The House on Creep Street is a rousing tale about Friendship and Family and Fright. For a book geared to younger teens or tweens it a very in depth story.The cover art does not do it justice. The cover looks a little comic bookish but it’s anything but.It’s a really well written and put together story with some very interesting twist and turns. Dealing with a possible murder mystery of a young boy and the death of his parents it give a young reader a bit to think about.

Just released in Sept 2014 this Halloween Ghost Story is a great book for the young man or Woman that like a cool spooky book (if they have the gut’s) Everything you could ask for Ghost, the Mean older Brothers, that Hot Sister of your best friend and of course you gotta have the old gravedigger in the cemetery(that goes without saying)
The best is the realization that Bullying is not cool!

You can find “The House on Creep Street” here

Next up for the Fright Friends  Beware The Monstrous Manther!