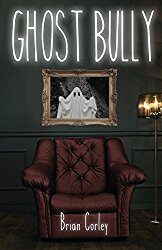 If this book “Ghost Bully” is any indication take note. If one day you start to suspect your house may be haunted pay attention to your gut. You know maybe your keys keep disappearing or you hear strange noises. Or if you actually see a Ghost or some sort of spirit. Listen to what they have to say. If they say get out well… 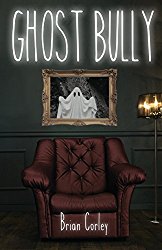 So goes the story of one Jonah Preston. You see Jonah not only knew his house was haunted he knew who the ghost was! It was Willard Freakin’ Hench.

Needless to say things didn’t go to well for Jonah his first few nights in his new house.So what happens? Well spoilers are not really my thing but lets just say Jonah wakes up? Well technically I guess he doesn’t really wake up.Let’s just say he wake up quite dead with a knife stuck in the back of his head.

And THIS is where the real story begins.So far this probably sound like every other ghost story you’ve ever heard. Trust me it’s not.I would go so far as to say you’ve never read a book like “Ghost Bully”. If there is such a classification I’ll call this one a Paranormal Comedy. This book is hilarious. It’s got some great one-liners. It also has one of the best lines I’ve read in quite a while. Page 291 if you get the book.Jonah a little confused about some of the Demons he comes across. Some bad some not really all that bad is given what I think is a pretty good analogy. Did I say Demons? Yes along his ghostly travels Jonah (THE DEAD ONE) meets a number of Ghost, Spirits, Demons and yes even Angels.

I love to read a well written, thought out book. When it’s funny like this one the sense of humor of the author comes out as thoughtful, witty, tongue in cheek and just plain clever. He brings the assortment of characters to life(even the dead one)

Even within the fun the author gets fairly serious about what the afterlife actually could be and where it all began.

of Brian Corley author of

Jon told me that I should write that book, so I did.

A lot of people know someone that says they want to write a book. Maybe they’ve had an idea that’s been marinating for months, years, or decades. So what’s between them and writing the project they’ve dreamed about? What’s stopping them from finishing the project they’ve told their friends about for years? I don’t know, I’m not an omniscient being, I’m just some guy on the internet, but I can tell you the story of how I transformed from someone that talked about writing a book to someone who has a book out for sale.

My friend Jonathan Isaacs had been writing books for years by the time I beta read The House That Jack Built about a young guy that renovated a haunted house he inherited in Louisiana. Over beers, I made the comment that we’re afraid of ghosts because they may kill us while we’re asleep or not paying attention, but I didn’t think that ghosts really ever thought out what would happen if they killed the person in their house. I mean, that person becomes a ghost too.

Then what? You thought you were annoyed with them for making noise for the couple hours a night you were both up—now you have to deal with this spirit forever. Constantly whining about you cutting their life short, or moping around the house while you’re trying to do … whatever it is you like to do as a ghost. And what happens if that person becomes a much better ghost than you ever dreamed of being? A super ghost. Great, now you’ve created a super ghost who wants revenge … deal with that forever. Good luck with that.

Anyway, Jon told me that I should write that book, so I did.

Eventually, I went to Powell’s Books and picked up a decomposition book (it’s recyclable, but it’s a nice little metaphor as well) as well as Kevin J. Anderson’s Hair Raising. I spent the better part of the week making character sketches, and an outline for Ghost Bully that included ideas for chapters and dialogue.

Then sat on it for a couple of years.

Always in the back of my mind, I should get around to writing that book.

As life would have it, I had some time between jobs in May of 2017—three weeks to be exact. Just long enough where I didn’t feel comfortable sleeping in all day. So, I gave myself a job: to finally start on that book I’d been dreaming about for the past couple of years. Three weeks and around ninety thousand words later, I had the rough draft of Ghost Bully slapped together in a Word document, and I was on my way.

Thanks to a handful of beta readers and www.reedsy.com, I was able to have the book in good shape by the fall with a kick-ass cover (thanks to Jessica Reed). After Sharon Honeycutt and Crystal Watanabe’s team got through with it, the manuscript’s punctuation and grammar were in the Chicago style, and we were ready to go to print through CreateSpace.

So really, the only thing between me and that dream was sitting down and doing it. Right now I’m about sixty thousand words into the next one looking toward a January/February release date for 2019. Now, go do your thing!

Summary of the book

When choosing a new home, Jonah Preston never signed on to have a ghost as a roommate. Jonah knows the previous owner of the house killed himself there but doesn’t think it will be a problem–he’s just happy to own a new home and begin a new chapter in his adult life.

It ends up being an incredibly short chapter.

When Jonah wakes up dead, he knows exactly who is behind it. The house’sprevious owner, Willard Hensch, is unhappy with its new occupants andhas been making his presence known. The newly deceased Jonah finds his purpose in life and must fight off a graveyard full of ghosts and an ancient evil in order to save his friends in this paranormal comedy set in the freakish underworld of Austin, TX.

Bash and Lucy Fetch Team Vera and the Dream Beasts

Aoleon The Martian Girl Part two The Luminess of Mars –