Who believes in witches and witchcraft?

Amelia Estelle Dellos has written a romance/family story entitled ‘Delilah Recovered’.  This is the beginning of a series of books that will have you under a spell.  ‘Delilah 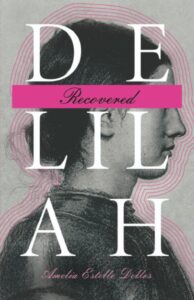 Recovered’ is the story of a woman named Dee an unemployed accountant looking for a job.  Dee also has many questions about herself and seems to have anxiety attacks that seem to radiate from issues from her family and herself professionally and personally.  Dee will need the help of those close to her from Wolf, Jonathan, Fay, Sage, and Tabitha Anthea for all of these characters will come together so that no one has to be hidden any longer for 300 years is long enough. Amelia Estelle Dellos has created a story that will keep you reading to the end.  She has added facets of old television shows and movies and books in such a way as she has a character that twitches her nose to mention lines from a children’s book that we have all read to Bible scripture and Jacob’s Ladder and using All Hallow’s Eve as a start to a supernatural adventure.  She also writes in printed script journal entries that Delilah shares with us her feelings about what is going on in her journey to figure out who and what she is living.

This could be a good book that could show how to overcome anxiety since the main character keeps a journal that is very important to her in dealing with various life issues.

Dee is an unemployed accountant managing an anxiety disorder and an eviction notice. She’s also a powerful witch, but she doesn’t know that yet.

One fateful night, when her reality cracks wide open, two witch hunters attack her, and she finally learns the truth.

Well, part of it. As a descendant of Joan of Arc, her family is the “guardian of the ring.” Uncovering this information only leaves her with more questions. Why did her coven banish her for three hundred years?  Is the ring really so important? Why has her true identity been kept a secret from her?

A Collection of Short Stories and Poems by Gary E. Smith

PARDON MY FRENCH – IT’S THE LANGUAGE OF BALLET: THE ADVENTURES OF LILLY NILLY

Don’t Drink the Pink by B.C.R. Fegan and Lenny Wen