Clara Humble and the Not-So-Super Powers by Anna Humphrey

by Annette Anderson
No Comments
SEARCH BOOKROOM REVIEWS on Bookshop

Clara Humble and the Not-So-Super Powers

Clara is a 9 year old little girl who’s world has just been turned upside down. Clara and her friend Bradley both attend Gladhill Elementary and they just found out the rival elementary school is sending some of their students to Gladhill while the people remove mold from the other school. The bad 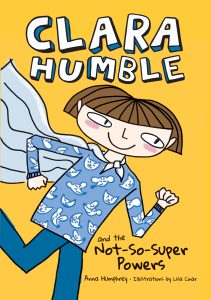 thing is these kids coming to Clara’s school are bullies and even pushed the school mascot into the pond.
Clara also has an amazing 80 year old neighbor, Momo, who has just decided to sell her house and move into a retirement home. This news really upsets Clara because she really loves Momo.
Clara already knows she has super powers because she is the fastest sprinter in her grade, she can also spill liquids and wake up at 7:14 A.M every day, even on weekends, so she and Bradley decide to use Clara’s powers to fix all the problems taking place.
Clara also loves comics and she creates her own comics starring @cat and Poodle Noodle. This girl has a huge imagination!
Even though the powers Clara has are actually just ordinary happenings, she and her friend Bradley plan to use them and soon lessons are learned.
Clara learns you can’t stop changes and you have to learn to deal with the outcomes. But, she is fun and a true hero.
This book will probably be the just the beginning of a great series full of Clara Humble and her wild imaginative stories. Her love for comics and her friends make her a super girl even though she really doesn’t have super powers. I feel like all little girls will love Clara and she can become a true friend to them.
You can purchase this hardback book, Clara Humble and the Not-So-Super Powers, on Amazon for around $13.00. Perfect for ages 7-13. My grandaughter loved it and can’t wait for book #2!

Anna Humphrey earned a BA in English at York University and a post-diploma certificate in Book and Magazine Publishing at Centennial College. After graduation,she knew she wanted to work with words, but had d been led to believe writers had to eat tuna fish every night and live in shoeboxes. So, instead, she tried her hand at some responsible jobs that used writing skills.Some years later, after her daughter was born, she quit her day job to stay home with her. And, in any spare moment she could find, she worked toward her big dream: publishing a YA novel.

These days she lives in a big, old brick house in Kitchener, Ontario with her husband and two kids, but she regularly works with publishers in New York and Toronto, and with clients based in Toronto, Ottawa, Montreal and Sudbury

Paris Was Ours by Penelope Rowlands Book Review