Characters   An Ancient Take on Bad Behavior by James Romm

An Ancient Take on Bad Behavior 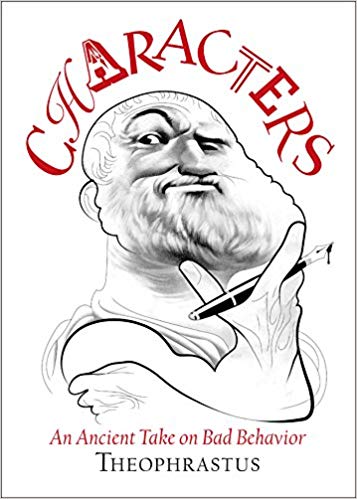 character sketches from Theophrastus and compiled by James Romm and Pamela Mensch.  This is a book of sketches of characters showing and telling of various bad behaviors from the ‘Dissembler’ to the ‘Chisler’ and in between the reader can read about the ‘Vulgar Man’ to the ‘Arrogant Man’ to the ‘Coward’.  There are many lessons that the reader will learn from these sketches of behaviors.  In my opinion some of these character flaws could be ‘good’ at certain moments, as in the ‘Social climber’, ‘PinchPenny’, ‘Late Learner’, and even the ‘Complainer’ for if there were not these particular characters along with various others in very small amounts life would be dull.  It takes all kinds to bring about understanding.  My favorite was the ‘Late Learner’ for this could just fit about any one of us for we all learn in our own ways.
The artwork throughout this book depicted each character very well through black and white pencil sketches with a lot of detail as did the introduction by James Romm for his introduction reminded me of the college Humanities lectures I listened to and learned from dealing with the classical periods and now I learned about Theophrastus along with all the other gods and goddesses of ancient Greece and Rome.  This would be a good research material for even a social worker/counselor who may be working with school behavior issues or even community members issues.
.
Available on AMAZON

The more things change, the more they stay the same: Theophrastus’ Characters, a classical Greek text newly translated for a modern audience, is a joyful festival of fault-finding. The book outlines 30 characters, each crystallizing a human flaw all readers will immediately recognize, and is a humorous survey of failings, follies, and bad behavior taken straight off the streets of Athens and brought into our everyday fraught and divisive social and political scene. Brilliantly illustrated by acclaimed artist Andre Carrilho, this is an irresistible treasure of a book.

The Talker—we all know one of these—is the sort who plumps himself down next to someone he doesn’t know and starts praising his own wife; he goes on to describe the dream he had the night before, and then relates in detail what he had for dinner. As the conversation proceeds, he remarks that people are much worse nowadays than they were in the past. And if you keep listening, he’ll never stop.

This is the type of guy who pulls up his clothes and flashes at women (not someone you want to be walking around with in public). In the theater, he applauds when everyone else has stopped, and hisses actors whom the rest of the audience take pleasure in watching; and when the audience is silent, he throws back his head and belches to make the spectators turn around.

This is the sort who, when invited to dinner, is eager to sit next to his host. The type that comes forward in a splendid cloak and wreath, and says, “Men of Athens, my colleagues and I have sacrificed the Galaxia to the Mother of the Gods, and the signs are favorable. Accept your good fortune.” After he’s made this announcement, he goes home and tells his wife he’s achieved a stunning success.

He goes out at noon and struts about making theatrical pronouncements: “The paid informers are making the city unlivable,” “We’re badly hurt by corruption in the courts,” “I wonder what people who pursue public careers really want,” and “The common people are ungrateful, though they receive plenty of handouts and gifts.”

He’s sure to join in when others are speaking ill of anyone, saying, “I’ve come to hate that man more than anyone.” When sitting in company, he’s apt to talk about someone who’s just left; and once started, he doesn’t stop until he’s maligned the man’s relatives. He’s especially given to speaking ill of his own friends and relatives (including the dead), declares that slander is just another word for free speech, democracy, and liberty, and gets more pleasure from it than from anything else in his life.

When walking with someone, the Flatterer says, “Do you notice how people are gazing at you? You’re the only one who attracts so much attention.” While the man is speaking, the flatterer urges everyone else to be quiet and praises him. He signals his approval when the man pauses, saying, “Quite right,” and if the man makes a joke that falls flat, he laughs. If the man is on his way to visit a friend, the flatterer runs ahead and says, “He’s on his way to you,” and, on turning around, says, “I’ve announced you.” At a dinner he’s the first guest to praise the wine, and he remarks to his host (by whom he’s sitting).

Says to someone who’s pressed for time that he’ll meet him after dinner while taking his walk. He says he never forgets that he’s done someone a favor. When walking down the street, he won’t speak to passersby, but keeps his head lowered, looking up only when it suits him. Whenever he’s going somewhere, he sends someone on ahead to say that he’s on his way. When sending a message, he doesn’t write “You would be doing me a favor,” but rather “I wish this done” and “I’ve sent someone to you to pick it up” and “Nothing else will do” and “Be quick about it.”

is the sort who, after washing his hands in a spring, sprinkling himself with holy water from a shrine, and sticking a sprig of laurel in his mouth, embarks on his daily rounds. Whenever he has a dream, he goes to the dream interpreters, to the seers, and to the augurs to ask which god or goddess he should supplicate.

This is the person who after winning a unanimous decision in a court case, faults his speechwriter for having left out many sound arguments. When his friends have pooled their funds to lend him some money, and one of them says, “So cheer up!,” he replies, “How can I? Haven’t I got to pay each of you back and be grateful as well for the favor you’ve done me?”

After shortchanging someone, goes back to ask him for a loan. When shopping he reminds the butcher of any favors he has done him. And then, standing next to the scale, he throws on some meat. If he gets away with it, fine and dandy. When his guests have bought theater tickets, he joins them without paying for his seat, and does the same the next day, on which occasion he includes his sons and their tutor in the party.

James Romm is an author, reviewer, and the James H. Ottaway Jr. Professor of Classics at Bard College in Annadale, New York. His reviews and essays have appeared in the London Review of Books and The New York Times Book Review, among other publications. His books include The Edges of the Earth in Ancient Thought (Princeton University Press, 1992), Ghost on the Throne: The Death of Alexander the Great and the Bloody Fight for His Empire (Vintage, 2012), Dying Every Day: Seneca at the Court of Nero (Vintage, 2014), The Age of Caesar: Five Roman Lives (W. W. Norton, 2017), and How to Die: An Ancient Guide to the End of Life (Princeton University Press, January 2018) .

André Carrilho is a designer, illustrator, caricaturist, and animator from Lisbon. He has shown his work in group and solo exhibitions in Brazil, China, France, Portugal, Spain, and the United States. His drawings have been published by Diário de Notícias, Harper’s, New York Magazine, the New York Times, the New Yorker, NZZ am Sonntag, and Vanity Fair, among other publications.

In Spite Of How I Survived Abuse, Cancer, and a Giant F@#%ing Stroke by Mary Reid-Hill

A Change of Faith by Roger Kazanowski