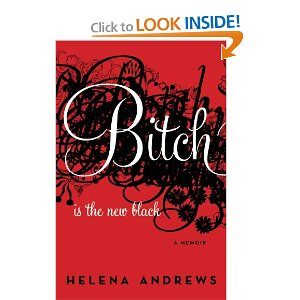 After a very brash introductory essay in which an obviously educated African-American woman complains aggressively in trash talk about transitory black men, Bitch Is The New Black dissolves into a tender memoir about a little black girl who ends up living in a small white town with only The Huxtables from The Cosby Show for company. Added to this is the burden of a loving but sometimes unsettling lesbian mother who also claims many years of celibacy and now wants her daughter to give her a grandchild, preferably female! In this book Helena Adams wonders why she’s reached the age of 28 without a relationship in sight that could lead to marriage, claiming that “A good black man wasn’t just clandestine, he was near Jurassic.”

The afore-mentioned little girl is very much alone, having no siblings and never having seen or had any interaction with her birth father. The word “bitch” of the title, we see as we read on, is both the strident post-modern yuppie shrew and the trampled-upon underling (and gender) that was rooted in Helena’s societal solitary confinement, surrounded constantly by others, as a child, but all the others being Caucasians. Frustrated, plus tired of hearing her mom and her current “mate,” Helena wrote fake Chinese, or “maybe they were forgotten hieroglyphs” on a refrigerator dry-erase board every day until her mom and mate “got so creeped out the three of us had a talk about all the things I wanted to say but couldn’t.” Regarding her birth father, “I imagined he was on the moon, and if I hoped for him enough, thought of him enough, prayed for him enough, he’d come back down……We didn’t even have to talk or even know who the other one was. I just wanted him to see me.”

Unlike other memoirs, Bitch Is The New Black (which originally is a comedic quote from Tina Fey of Saturday Night Live) devotes a portion of her essays to time spent online – IMing, playing games, opening oddly-named emails, and joining a “sort-of” black professional dating online forum because “Really, you should thank God for the gang of nerds who got together on their Segways and rode the information highway all the way to the bank, cashing in on our collective quarter-life crises criseses crisi. Making it impossible to stay mad forever, Facebook, MySpace, Gchat, LinkedIn, Skype, Twitter,

and whatever people are doing now to have each made this American life bearable for those of us on the too-in-touch-to-ever-be-nostalgic side of thirty.” The ultimate insult to a guy is to erase all traces of him from emails and IMs and stop following his antics on Facebook! Relationships are even ended on-line via lies, as when one boyfriend keeps telling her that he wouldn’t want her to be with someone less perfect (like himself)!

Helena buys and socializes a pug dog to assuage her loneliness, and Miles, the dog, even though named after the black jazz great Miles Davis, embarrassingly dislikes most black men! (This reminds me of a part of Shirley MacLaine’s book Out On A Leash, where she has embroidered on a pillow the phrase “The More I Learn About Men, The More I Love My Dog”!)

Bitch Is The New Black is often abrasive and sometimes shocking to read, but it is unerringly honest and Helena Andrews, when interviewed for The Root, said that we forgot the most important thing about black women today – that they’re strong. What more can one ask from a memoir than present-day experiences coupled with the rendering of one’s childhood, a time when adults with perhaps other inclinations than your own have all the control? Uneasiness, competitiveness and secret vulnerabilities (especially when a sorority sister commits suicide) hold hands as friends throughout this book behind a fiercely protective shield. When you finish reading it you’ll feel as if you know enough about Helena Andrews and her life’s journey to be her friend too!

Bitch Is The New Black, a book of essays in memoir form by Helena Andrews, published by HarperCollins and on sale June 1, 2010, 224 pages.

Christina Zawadiwsky is Ukrainian-American, born in New York City, has a degree in Fine Arts, and is a poet, artist, journalist and TV producer. She has received a National Endowment for the Arts Award, two Wisconsin Arts Boards Awards, a Co-Ordinating Council of Literary Magazines Writers Award, and an Art Futures Award, among other honors. She was the originator and producer of Where The Waters Meet, a local TV series created to facilitate the voices of artists of all genres in the media, for which she won two national and twenty local awards, including a Commitment to Community Television Award. She is also a contributing editor to the annual Pushcart Prize Anthology, the recipient of an Outstanding Achievement Award from the Wisconsin Library Association, and has published four books of poetry. She currently reviews movies for http://www.movieroomreviews.com, music for http://www.musicroomreviews.com, and books for http://www.bookroomreviews.com.

Tags: Bitch Is The New Black

Sovereignty by Anjenique Hughes: a book Review a Dystopian Novel

My Yellow Balloon by Tiffany Papageorge