and the Not-So-Super Powers

1. Where or how did you come up with the idea for Clara Humble and the Not-So-Super Powers

I came up with the idea for this book when my husband and I started thinking about moving to a new city. I knew how hard it was going to be for my kids. It would change their whole lives, yet they had no control over the situation. I remember that feeling of powerlessness so well from my own childhood—and that’s where the inspiration for Clara’s (extremely minor) super powers came from. Would it be possible for a kid to develop the power to control their world if they wanted to badly enough? 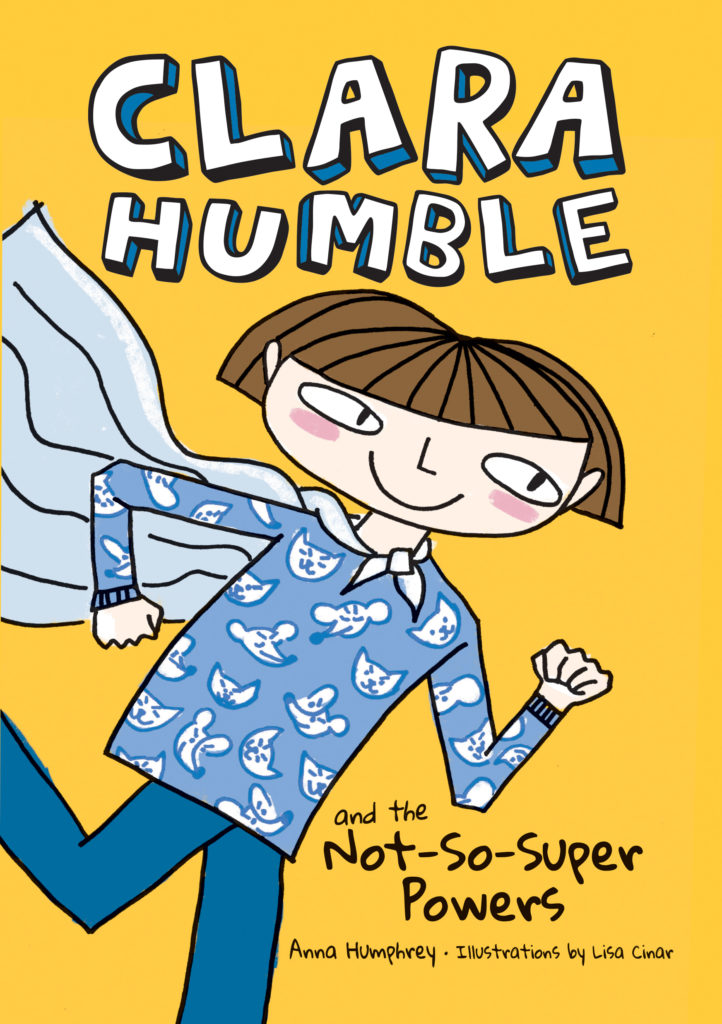 When I start a book, I always think of this quote by E.L. Doctorow: “Writing is like driving at night in the fog. You can only see as far as your headlights, but you can make the whole trip that way.” I have a destination in mind—and maybe an idea of a few landmarks (or important scenes) I’ll need to pass along the way—but beyond that, it always feels like a leap of faith. That said, the main character is beside me in the passenger seat helping me navigate. Which is good, because on my own I have very little sense of direction.

The parts with Momo (Clara’s elderly neighbor/best friend who is moving away) are definitely closest to my heart—especially the ending, when Clara puts her most minor power to good use to help her friend.

The character of Momo is based on our real-life ex-neighbor. When we decided to move to a new city, leaving her behind was the hardest part—not just for my kids (she’s like a grandma to them) but for me as well.

“How lucky I am to have something that makes saying goodbye so hard.” – Winnie the Pooh

It’s so hard to choose favorites! As for who has influenced me, though, I’d have to say it’s mostly been the middle-grade and YA writers who do comedy so well: Gordon Korman, Susan Juby, Daniel Handler (AKA Lemony Snicket), Jeff Kinney…

7 . Do you have a favorite fictional character?

Owen Meany from John Irving’s A Prayer for Owen Meany.

That’s such a hard question! Maybe careful, quiet, gentle, reserved and punny? Basically, I’m the complete opposite of my character Clara Humble who’s an ultra-confident risk-taker. The only thing we’ve got in common is that we both make groan-worthy puns.

Clara Humble is a three-book series. OwlKids is busy putting the finishing touches on book 2 (Clara Humble: Quiz Whiz), which will be out in September 2017. It’s about Clara competing against her best friend Bradley in a crazy quiz show. Meanwhile, final edits are underway on book 3 (Clara Humble and the Kitten Caboodle—in which Clara and Bradley care for a family of stray cats). I’m also working on an early reader called Megabat, which is about a tiny, funny-talking, Star-Wars-obsessed fruit bat. It is set to be published by Penguin Random House Canada in 2018.

The first two reviews I read for my very first book (Rhymes with Cupid) were posted by bookstore customers online. They both gave it one star. One said: ‘Not worth the money.’ The other called it ‘aweful’ (and I’m pretty sure they didn’t mean that it filled them with awe). Plenty of kind, thoughtful reviews followed, but those two still make me feel a little sick.

In her Quill and Quire review, Sarah Ellis (whose writing I’m a huge fan of) called Clara Humble “quietly subversive.” I kind of want to have that printed on a T-shirt so I can wear it everywhere. Also, any time a kid writes to me and asks for a sequel to one of my books.

Several! But who knows, they may see the light of day yet. When it comes to getting published, a lot depends on pitching the right book at the right time.

Honestly, not as often as I’d like to! I love getting email. And snail mail is even more fun.

I think a good story needs to have an emotional transformation of some kind. The characters need to come to understand themselves in a new way. And especially if it’s a kids’ story, even if it doesn’t end “happily,” it should finish on a hopeful note.

I think they’re both important! Even the most intriguing characters need to do something, learn something, face something, realize something or conquer something for the story to have wings.

I love thrift store shopping, baking, reading (of course!), and jumping with my kids on our big trampoline. (True fact: It’s impossible to be sad or worried while jumping on a trampoline.)

“I won’t lie to you. Strange things had been going on for a while, but I didn’t realize how truly exceptional I was until the day of the dancing-alligator attack.” 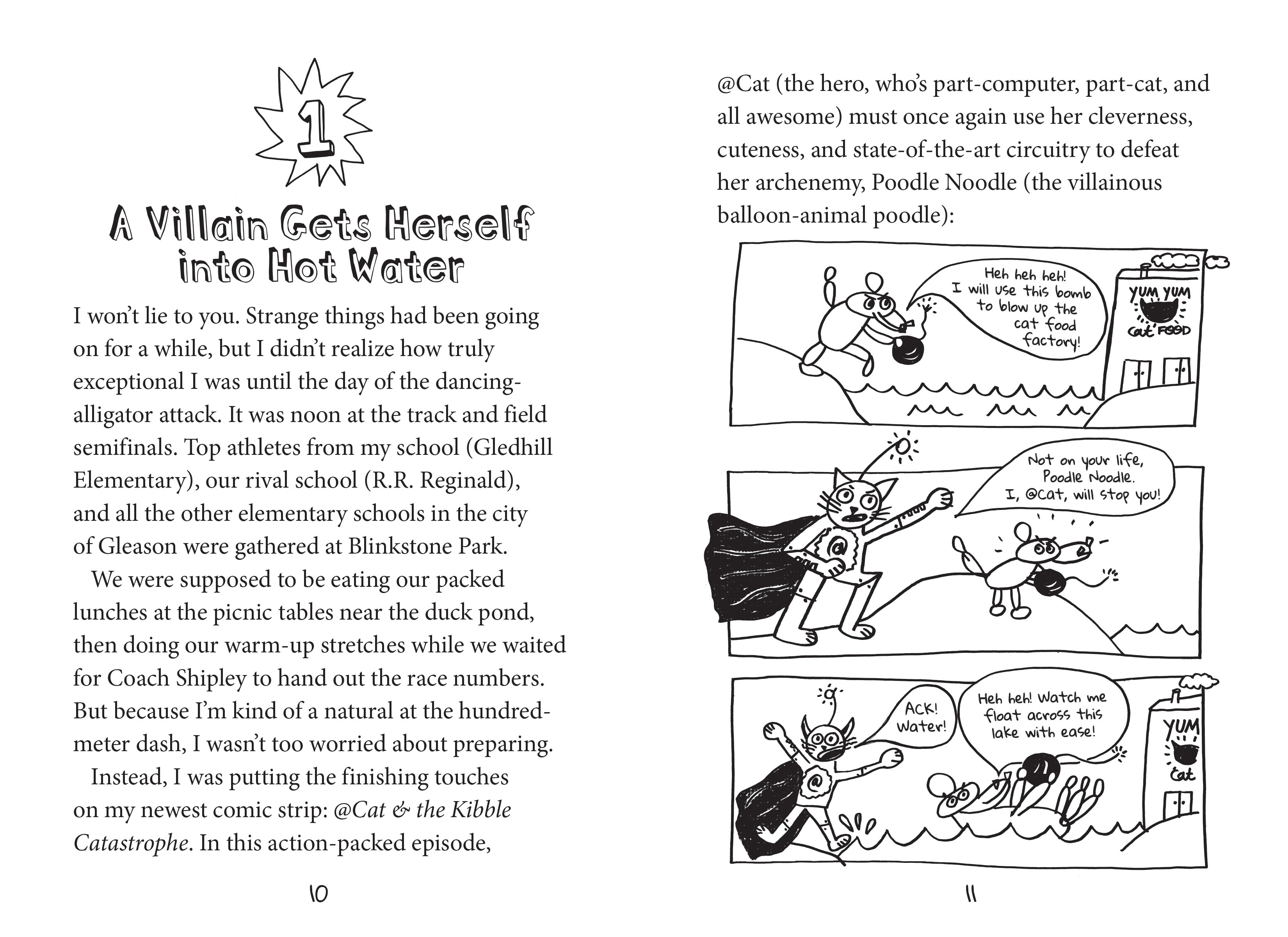 I don’t know about tools and elements, but I can talk about qualities. Curiosity and empathy are essential. And so is being a good listener and observer.

I was incredibly shy as a kid—to the point where I rarely spoke to teachers or to people I didn’t know well. In grade two, my teacher caught me writing a play when I was supposed to be doing math… but instead of punishing me, she encouraged me. She had the class put on my play—complete with props and costumes. I knew from there on it that writing was going to be my comfort zone: the way I could have a voice, but it wasn’t until I got into a creative writing program at Canterbury High School in Ottawa that I realized I really wanted to be a writer.

There are so many distractions these days—and everyone’s busy. It makes me feel all the more grateful to anyone who’s taken the time to sit down and read one of my books. I don’t think I’ll ever get over how unbelievable it is that, in some small way, my words have been part of other people’s lives.

You can find her great Hard Cover Book on Amazon 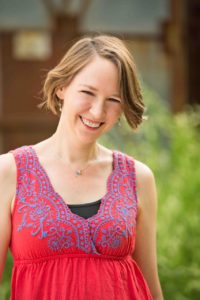 Anna Humphrey dreamt of being a writer since she was a teenager. And those dreams came true with the publication of her first YA novel Mission (Un)Popular, published by Disney/Hyperion. Clara Humble will be Anna’s fourth book. She lives in Kitchener, ON.

An Interview with Andria M. Redlin, author of For Her Courage