An Interview with Roger Kazanowski, author of A Change of Faith

An Interview with Roger Kazanowski,

A Change of Faith

A Change of Faith compels readers to wonder, “Why hasn’t this happened yet?” when a historical change in Catholicism allows women to enter seminaries and become priests. For the first time, women are brought to the forefront of the Catholic world and intertwine with characters stemming from both fictional and real events. Suspense draws readers as the women becoming priests are mysteriously being murdered. The novel’s lead, Vicar Charlotte, finds herself torn between her love for God and her love for an aspiring artist named John Adams, but merciless tormentors will stop at nothing to destroy her…and she might not live long enough to choose.

Question: What inspired you to write A Change of Faith?

Roger Kazanowski: Being raised Catholic, I always wondered just how legitimate the argument was that the Scriptures dictated women couldn’t become priests. To get people thinking, “Why Not?” I decided to write a book about “Why Not!”

Q: What sets A Change of Faith apart from other novels?

Kazanowski: To my knowledge, no other book has been written about the Catholic Church allowing women to become priests. The book also includes assassination attempts against the current Pope Peter Paul, both controversial topics that will quickly spark conversation and debate.

Q: A Change of Faith makes the reader consider possibilities that could happen in reality. Why do you think it’s important that there is a book to acknowledge scenarios such as women becoming priests?

Kazanowski: The Catholic religion has a strong history of male domination; hundreds of years of political manipulation. With recent problems of pedophiles, why not have female priests and expand the opportunities to half the Catholic population?

Q: What made you realize that the Catholic Church is a business?

Kazanowski: I realized this during a trip to Italy with my daughter’s high school choir where they performed at a number of major cathedrals including St Peter’s Basilica. While there it became very clear that everything there had a price tag. I spoke to one of the chaperones and she explained to me that her husband was a Minister. As we furthered our conversation, she explained how he had three locations and hired minsters to perform Sunday services. By the end of our trip, it became clear that churches are just like any other business, focused on profit and their bottom line.

Q: Like you, the character of John Adams is a fine artist and worked as an automotive designer at Ford Motor Company. Are there any other qualities of yourself in him?

Kazanowski: Yes, our love for family and friends. Also, both of our fathers are bar owners, and brother Bob is real and a bar owner. His best friend Michael is my own best friend.

Q: As a businessman with extensive experience in start-up companies, you have knowledge of what it takes to have a successful revenue stream. What tips can you share with other entrepreneurs?

Kazanowski: Believe in your product and get to know your partners. If you don’t trust those that you will be either investing with or working with, don’t get involved. Make sure you’re capitalized as it always costs more and takes longer then you think before you’ll be cash flow positive. Don’t lose focus, don’t spend what you don’t have, and don’t count your future dollars until they are in the bank.

Q: Can you divulge any secrets to the follow-up for A Change of Faith that is in progress?

Kazanowski: The follow-up book continues with our characters accomplishing higher personal goals but not without a number of barriers. Pope Peter Paul’s health has greatly deteriorated leaving the Cardinals who will be participating in the vote for the new Pope vying and manipulating on their own behalf. As this takes place, other outside developments take place still demeaning the female priest population. John Adams encounters personal family issues that lead to major decisions which include him and Charlotte. John’s political friends are once again brought into the loop before things go sideways.

A Change of Faith is available in paperback and e-book editions on Amazon.com. An audio book is in production. 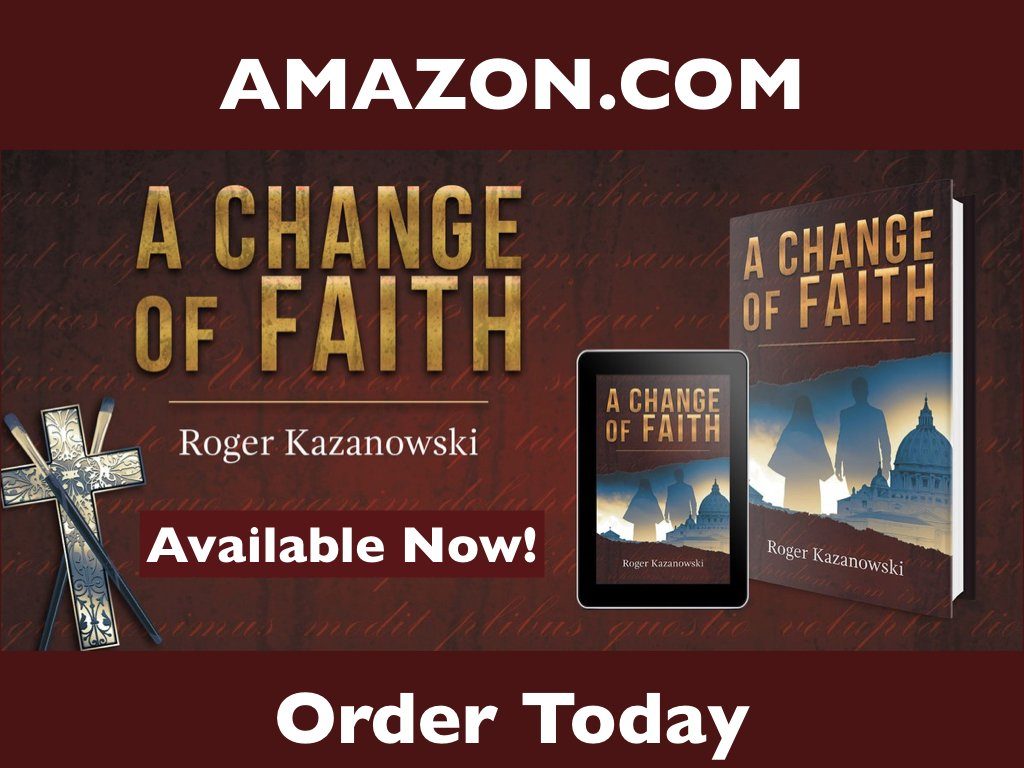 Roger Kazanowski was a student of a Catholic school, attending mass on a daily basis. Part of his education through the eighth grade was to study and become well-versed on Scriptures. Today, as an adult, he now looks at religion much differently, realizing that religions and churches are first and foremost a business. His career was initiated as a fine artist exhibiting his watercolors nationally at numerous one man exhibits while keeping a short career as an automotive designer for Ford Motor Company. After achieving success in multiple career paths, Kazanowski embarked on yet another course and quickly became recognized as a noteworthy entrepreneur. He has created and developed businesses in many industries, including bio-medical, security detection systems, golfing, energy, and liquor start-up, in addition to holding other consulting positions. He has participated in numerous Board of Director positions in both for profit and non-profit charities. Kazanowski resides between St. Pete Beach, Florida, Union Lake and Petoskey, Michigan.

A Change of Faith is available in paperback and e-book editions on Amazon.com. An audio book is in production.

Across the Aisle an Author Interview with Stephanie Vance