Book Review: Facing Forward: An Artist, A Community, And Stories Of Resilience 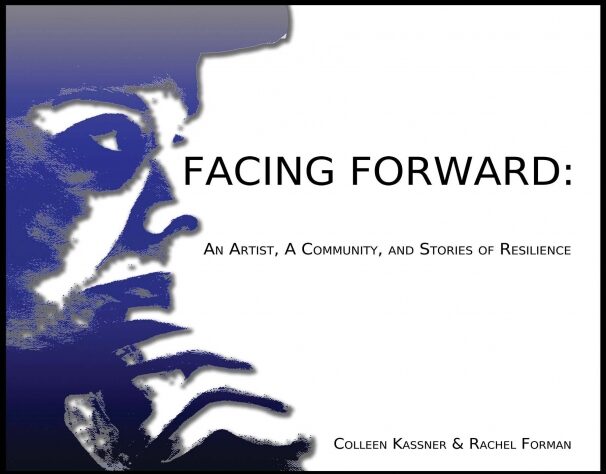 Facing Forward: An Artist, A Community, And Stories Of Resilience by Colleen Kassner and Rachel Forman, published by Grand Avenue Club on May 23, 2013, 118 pages.

The Grand Avenue Club seeks to “provide adults who have experienced mental illness with opportunities that will assist them to experience recovery and to integrate into society so that their lives are productive and satisfying.” Many who have endured “the despair beyond despair’ (William Styron) are now offered paid employment and schooling that changes their lives.

Colleen Kassner, who initially “confronted and met the challenges of mental illness, alcohol abuse, long hospitalizations, and careless psychiatric care leading to excessive medications” turned her life around and recovered, due to active engagement with the GAC community, her love of creating artwork (which began as art therapy) and the strong support of her husband Philip ‘Philo’ Kassner, a poet and photographer. She now encourages club members to show and sell their artwork at Gallery Grand, often to collectors, and Facing Forward contains the portraits of 51 members (plus group portraits).

Rachel Forman, Executive Director of the Grand Avenue Club and a member of the Advisory Council of Clubhouse International, interviewed all 51 members and edited their stories for this book. Rachel notes that GAC members think of GAC “as a home, a place to come to, a place in which they are accepted and can contribute something to others, a place where mental illness is not the primary focus and a place to which they may return after any length of time. Some members have stopped being hospitalized since they joined this community.

Colleen tells us that having experienced mental illness “was no one’s fault. It’s just a fact of my life.” Because of her bipolar disorder, Colleen would often “work myself into states of total exhaustion , then crash into clinical depression.” But Colleen received a grant to paint the portraits of GAC members after she became their Artist In Residence. Among the members Colleen saw “resilience. I saw perseverance. I saw relationships that sustained people. I saw true friendship.”

Facing Forward contains vibrant and animated portraits of GAC participants who are “warm, intelligent and eager to contribute: Sometimes sad, sometimes glad.” Michael Bivens tells the story of how “My mother left me when I was 19 years old on a city street corner,” and after that he had to survive, stealing and going to the House of Corrections for loitering and roaming. Brian Gumma served as a placement manager at Clubhouse International, “meaning that I have helped other employed members and do absentee coverage.” Greg John worked in the Human Resources Department at Marshall & Illsley Bank but later became homeless and thought that “constant sadness and anger were what everyone else experienced too.” Janet McCray says, “When I was growing up, I always felt that something was wrong with me,” and Trixie Morse says that her first experience in a foster home, when they said she stole a cookie, was that “a woman put my hands on the hot stove and said, ‘That’s what happens to thieves.'” Dano Peterson tells us that “I didn’t know I had a mental illness until I was an adult.”

Children of broken homes and divorce, the abused, the cared-for, those whose family lives were stable, some with auditory hallucinations (Gerald Lloyd’s interview states that “It was like having a radio station in your head and not being able to turn it off”) and/or visual ones, those who turned to substance abuse to try to self-medicate, the rich, the poor, white, black and of all races, the young and the old and believers in all religions and the non-religious: mental illness does not discriminate in terms of whom it will strike. As Colleen writes, “Mental illness is a life-altering experience…. The stigma of mental illness, often augmented by negative images in the media, can evoke shame and fear resulting in withdrawal from friends, work, family and society” and “Every person in this book has the same desires for acceptance for who they are and their unique talents.” At the Grand Avenue Club companionship and a sense of community have actually helped dispel fear and the feeling of being an outsider.

Facing Forward: An Artist, A Community, And Stories Of Resilience is an important and unusual book, one that underscores how necessary it is to be part of a societal whole. By showing us the images and stories of 51 individuals who have experienced mental illness, Colleen Kassner and Rachel Forman have also shown us humanistic reflections of ourselves, we who are all yearning for peace and independence, and sometimes achieving it by helping each other.

Christina Zawadiwsky is Ukrainian-American, born in New York City, has a degree in Fine Arts, and is a poet, artist, journalist, critic and TV producer. She has received a National Endowment For The Arts award, two Wisconsin Arts Board awards, a Co-Ordinating Council Of Literary Magazines Award and an Art Futures Award, among other honors. She was the originator and producer of Where The Waters Meet, a local TV series created to facilitate the voices of artists of all genres in the media, for which she won two national and twenty local awards and a Commitment To Community Television Award. She is also a contributing editor to the annual Pushcart Prize Anthology (and has received one herself), the recipient of an Outstanding Achievement Award from the Wisconsin Library Association, has published books of poetry and has had poetry and fiction in hundreds of literary periodicals. She has reviewed music for Music Room Reviews, films for Movie Room Reviews, Movie Scribes, and FilmSay, and is currently reviewing books and films online for Book Room Reviews at www.bookroomreviews.com while also showing artwork professionally.

I’m Not Single, I Have a Dog  Dating Tales from the Bark Side

EBook Writing Tools: How To Print To PDF