An Interview With Brian Rouff author of The House Always Wins 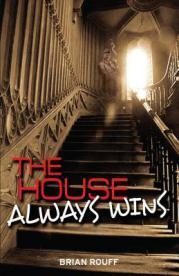 An Interview With Brian Rouff author of

1. Where or how did you come up with the idea for The House Always Wins?

My family and I lived in a big old fixer-upper house in Las Vegas in the early 2000s. I always swore the house was haunted; strange noises, odd temperature changes, drawers, doors and lights seeming to have lives of their own. Of course, there were logical explanations for all of it but then I wouldn’t have a book. So I took the idea and ran with it, making the ghost a dead mobster who actually helps the young couple who buy the house in their fight against a corrupt casino owner.

2. When you sit down to write do you have an idea where you are going or does it just happen as you’re
sitting there? Or is it actually the characters writing the story?

I don’t outline first, because I feel it stifles creativity. But I have lots of thoughts and ideas scribbled on place mats and napkins and Post-its, which I try to put in some kind of order. Mainly I just start writing and see where the characters take me. Sometimes a minor character decides to become a major one and you just have to go with it. In my first two books, “Dice Angel,” and “Money Shot,” I had no idea how they would end until about two-thirds of the way through. Scary but you learn to trust the process. In my latest book, “The House Always Wins,” I knew the ending but not how I would get there. So I wrote the end first.

3. What was your favorite chapter (or part) of The House Always Wins to write and why?

The chapter in which Meyer Levin, the ghost, makes his first appearance.

The house for sure. And the ghost’s backstory, which is based largely on my father’s early life. He grew up in Detroit during Prohibition, a time when the notorious Purple Gang got its start. They grew up side by side and went to school together. The gangsters went one way and my father went another, which is why he lived to a ripe old age while they all died in a hail of gunfire or languished in prison.

“I needed a drink, I needed a lot of life insurance, I needed a vacation, I needed a home in the country. What I had was a coat, a hat and a gun. I put them on and went out of the room.” ― Raymond Chandler, “Farewell, My Lovely “

Gotta be Atticus Finch, right? The role model for an entire generation of fathers.

That I don’t know how to write. (By an agent, of course.)

That I made someone laugh and cry. (Multiple examples of this.)

No. I self-published the ones I couldn’t get traditionally-published.

All the time. Some want to tell me what a particular book meant to them. Others ask for writing or publishing advice. A few have wanted to take me to lunch when they’re in Las Vegas. I accept when I can because I’m a sucker for a free meal. Someday I’ll probably accept an invitation from a serial killer and that will be that. My own personal version of “Misery.” Not a bad idea for a novel, come to think of it.

Three-dimensional characters you care about who learn a thing or two from the first page to the last. Honesty. Snappy dialogue. A sense that everything’s on the line. And a surprise ending never hurts.

15. I think I know your answer but, what’s more important to you characters or plot?

Characters. Think back to your favorite books and movies. What do you remember most?

17. How about a snippet from your book The House Always Wins that will hook a prospective reader and make them want to read your book.

“Just you. Your father. And me. In the basement of the Lewis and Clark, right under my casino. Your old man was a heartless bastard, but at least he was someone I could respect. Self-made, pulled himself up by the bootstraps like we all did in those days. And there he is, angling for controlling interest in the joint, because he thinks I’m too old, I’ve lost my touch. And I won’t budge an inch, despite all the threats. Because I’ve lived my life, you know? And he says I’d better play ball or I could experience, how did he put it? ‘Sudden death.’ I start to laugh, really hard, tears running down my cheeks. He stares at me like I’ve lost my mind and I say, ‘At my age, it’s not so sudden.’ And he laughs, too. Right before he backhands me across the mouth. And I taste blood, not for the first time, I can tell you that. And I say, ‘There’s nothing you can do to me that someone hasn’t already done worse. Like the doctor who did my last prostate exam.”

Awareness. Excellent powers of observation. Organization and time management skills. A good ear for dialogue. The ability to tough it out after hitting the wall. And maybe a little OCD.

I was good at it from an early age. My parents and teachers encouraged me, so I stuck with it. I’ve always been able to earn a living writing marketing materials — brochures, TV commercials, print ads and the like — but waited until middle-age to try my hand at novels. I figured I’d better rack up some life experiences first. It was like scratching an old itch, one of the best decisions I’ve ever made.