An Interview with Andria M. Redlin, author of For Her Courage 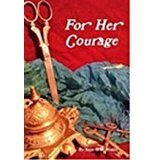 An Interview with: Andria M. Redlin, author of

For Her Courage  , which is the first in the Holly Hollow Tales series, available in paperback or e-format on www.amazon.com, www.barnes&noble.com, www.lulu.com and elsewhere.
Ok Andria lets get to it Bookroomreviews
Twenty Questions…
1. Where or how did you come up with the idea for this book ?
It was 2010, and I was in the middle of reading A Christmas Carol as I do every year around the holidays, when I got the idea to write a Christmas story of my own. Five years later, after way too much procrastination, I completed it.
2. When you sit down to write do you have an idea where you are going or does it just happen as you’re sitting there? Or is it actually the Characters writing the story?
When I sit down to write, I usually do have some kind of game plan for where I want the story to go, but more often than not, the story goes where it wants to go, and I am powerless to stop it. Sometimes I feel like the stories write themselves, and I am just the person who writes them down. I also find myself having to let my characters have their way, because there are things I would like them to say or do that they would be very unlikely to accomplish. So I let them do what comes natural to them. To me, they are almost real, with diverse personalities that direct my writing to places I have never been.
3. What was your favorite chapter (or part) to write and why?
My favorite chapter in For Her Courage was probably Chapter 4-The Attic of Memories. This is the chapter in which one of my main characters, 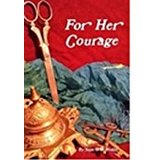 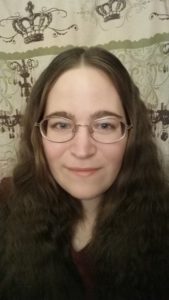 Has been an avid writer for the last twenty years, and is currently working on a young adult fantasy series that is being edited by her friend and fellow author Deborah Glaefke Gilbert, a former professional editor and Cleveland State English professor. The two of them are also writing a humor book together. In addition, she is nearly finished with the next Holly Hollow Tales book, which should be finished before the end of this year. Her favorite genre to read and write is YA Fantasy, but she also reads true crime, history, biography/autobiography, and how-to books.
Visit her on Twitter and Facebook

An Interview with Joan K. Lacy, author of A Shadow Away: Alex Cort Adventures Book 1

Exile: A Sci-Fi Action Adventure (Guy Erma and the Son of Empire Book 3)