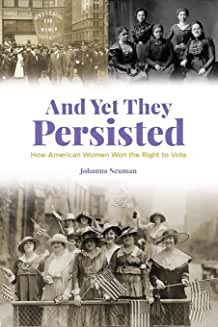 How American Women Won the Right to Vote

And Yet They Persisted is a

comprehensive history of the women’s suffrage movement in the United States, from 1776 to 1965

Johanna Neuman
First of all I love the Title. Like Sen. Elizabeth Warren These women Persisted.This book  is a shining example of why Protest like the Black Lives Matter protest we have going on now in this Country are needed. When social change is needed you have to be heard. When you have a Man as Ignorant and divisive as Donald Trump in the White House you have to be heard.

Most suffrage histories begin in 1848,

when Elizabeth Cady Stanton first publicly demanded the right to vote at the Women’s Rights Convention in Seneca Falls, New York. And they end in 1920, when Tennessee became the 36th state to ratify the 19th Amendment, removing sexual barriers to the vote. And Yet They Persisted traces agitation for the vote over two centuries, from the revolutionary era to the civil rights era, excavating one of the greatest struggles for social change in this country and restoring African American women and other women of color to its telling.

In this sweeping history, author Johanna Neuman demonstrates that American women defeated the male patriarchy only after they convinced men that it was in their interests to share political power. Reintegrating the long struggle for the women’s suffrage into the metanarrative of U.S. history, Dr. Neuman sheds new light on such questions as:

What would this country or even the world be like if the women did not win the right to vote? This is a 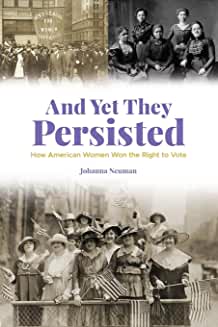 history book written by Johanna Neuman that answers this question with historical accuracy. This is a
book that goes way back to the beginnings of women’s suffrage and how they overcame the many
issues dealing with economics and politics and constitutional law to make everyone feel like they have
something to offer. The word that is important to women at all the various generations of women
wanting to vote is ‘ratification’.

Johanna Newman has written a textbook for a Women’s Studies program and even as part of a survey
course in American history of the late 19th and 20th centuries that would provoke many discussions on
this topic of the ‘suffragists’ and ‘suffrage’ and the many issues that they brought forth in and for
society at times and for the future.

My favorite area of the book was all the photographs of the famous women and men who believed that
we all should have the right to vote without the many restrictions that were used as literacy tests, etc.
This book is a living history of these times and we can still learn from them. This text would be a good
supplemental text for even an American government course when studying the US Constitution. This
is and enjoyable read for anyone interested in learning about this era inAmerican history.