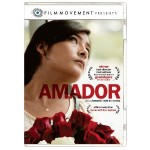 If you didn’t have any money, how far would you go to get some money? In the film Amador (released on DVD on 5/8/12 by Film Movement and directed by Fernando Leon De Aranoa) Marcela (Magaly Solier), a young South American immigrant, needs money for the flower business she runs with her boyfriend Nelson (Pietro Sibille), to pay for three months back rent plus a refrigerator in which they

must keep the flowers they sell. Marcela saves the day by finding a summer job taking care of an elderly gentleman, Amador (Celso Bugallo), who tells her that life is like the jigsaw puzzle he’s trying to put together (where the sky and the sea are difficult), as we as people are born with all the pieces, but we have to learn how to put them together.

Marcela, who finds out that she’s pregnant after a fainting spell (but doesn’t trust Nelson and doesn’t know if she wants to spend her entire life with him), is taking care of Amador and being paid by his daughter Yolanda (Sonia Almarcha). Sonia is in another city with her family trying to set up a new home that will include more room for her father. Marcela finds a lot of what Amador says amusing, like “God made the clouds so he could hide behind them when he’s ashamed of something,” and he tells stories about women that he sees from his windows, especially one in a wheelchair, that he claims are mermaids. But it is a relatively easy job (Marcela gets to read magazines and listen to the radio when Amador is sleeping or resting), and because of her efforts she can keep her current life going – until something very unexpected happens.

Amador dies, with a jigsaw puzzle piece still in his hand, while Marcela’s in the other room. Marcela is scared but also feels that she can’t give up the money she needs from this job, so she doesn’t phone Yolanda immediately. She prays for Amador in church, she cries, she feels terrible, but she waits – finally phoning Yolanda and asking if she can be advanced her money for the month early (but not telling her what’s happened to Amador).

Letters arrive, the house superintendent asks why there’s a smell coming from Amador’s quarters, and an aging visitor who sees Amador every Thursday finally helps Marcela with a short-term solution.
But still Marcela worries, as

she wonders if Nelson is even being faithful to her, and she hesitates to tell him about her pregnancy.

An unusual film about life as a puzzle and how we can’t always make snap decisions, Amador has great performances, especially by Magaly Solier playing Marcela and Celso Bugallo playing Amador (who knows that his life will soon end). Secrets abound and photos are torn up and then put back together revealingly (more life puzzles). Marcela is trapped by economic reasons, as we all may have felt at one time or another. An excellent multi-award winning film about the nature of morality by a well-known European director.

Reviewed by Christina Zawadiwsky
Christina Zawadiwsky is Ukrainian-American, born in New York City, has a degree in Fine Arts, and is a poet, artist, journalist and TV producer. She has received a National Endowment for the Arts Award, two Wisconsin Arts Boards Awards, a Co-Ordinating Council of Literary Magazines Writers Award, and an Art Futures Award, among other honors. She was the originator and producer of Where The Waters Meet, a local TV series created to facilitate the voices of artists of all genres in the media, for which she won two national and twenty local awards, including a Commitment to Community Television Award. She is also a contributing editor to the annual Pushcart Prize Anthology, the recipient of an Outstanding Achievement Award from the Wisconsin Library Association, and has published four books of poetry. She currently reviews movies for , music forhttp://www.musicroomreviews.com, and books for .