Of Dolls And Murder DVD Review 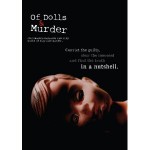 “The dead are talking – we just don’t like what they have to say,” says

the narrator (John Waters) of the documentary Of Dolls And Murder, released on DVD on 4/24/12 by Seminal Films/MVD Entertainment. In the late 1930s and 1940s Frances Glessner Lee (an heiress to International Harvester who was not allowed to go to Harvard like her brother – because she was female – but instead was tutored at home) devised The Nutshell Studies – small dollhouse scenarios of real crime scenes that helped the police and others to analyze crimes. Before forensics, DNA and CSI these set-ups helped investigators (and still do today), as Frances Glessner Lee meticulously painted dolls the colors of corpses (she studied with autopsy workers) and presented every single specific aspect of each crime (duplicating purses, clothing, barns, rooms, etc.), having a carpenter help her with details. All believed she was “really speaking for the dead,” on a subject that most people didn’t want to even consider.

Dr. Katherine Ramsland (who has written about “the CSI effect”) believes that CSI TV programs have created a frame, a safe place, for the topic of homicide for the general populace, but on the other hand have often miseducated the public, even causing jurors to have “reasonable doubt” about cases from misinformation they’ve gleaned on TV, like one case where a program admonished police for not finger-printing grass, which Ramsland feels is nonsense. Frances Lee Glessner’s Nutshells, about which Ramsland comments positively, are housed in Baltimore where even the general public can see them, and most people do a double-take, because they are not just “dollhouses” but scenes of domestic environments where murders have occurred. Whereas on TV “murder is entertainment,” in the Nutshells the murderer is not disclosed and police and investigators can keep looking at the clues (which they couldn’t do in a real crime scene, which is photographed but later dismantled).

One Nutshell, of the murder of a woman (in a hotel “where no one had bothered to change the calendar in five years”) involved a man and a woman who had checked into the hotel registered as Mr. and Mrs. Smith. The following day Mr. Smith departed, asking that Mrs. Smith not be disturbed – until she was found hours later in a state wherein she wouldn’t be “checking out”! Another shows a barn where an eccentric farmer used to yells and put his head in a noose, as a crazy and angry joke in arguments with his wife – until one day when he was found hung by it…. Yet another depicts a young girl who’d gone to the butcher’s shop to buy steak for the family’s dinner and was later found stabbed somewhere else altogether.

Susan Marks has created a fascinating documentary about those who must deal with what all the rest of us don’t want to see. One worker says, “How can I do what I do, and how can I live with people, doing what I do? It’s a challenge.” An autopsy technician, Darralyn Butler, says he and his co-workers don’t watch the news because “we know we’re going to see the news when we get to work,” and another examinator comments on how difficult it is to deal with brutal child murders. Yet young people keep going into the field, athough they say that their social lives are not as glamorous as those of workers written into scripts on TV.

Frances Glessner Lee created a niche for herself (that’s still relevant today) in a field considered “unfit for women” at the time, but Susan Marks, as a filmmaker, has done the same, sensitively depicting aspects of murder and crime search. A serious film for those interested in this topic!

Christina Zawadiwsky is Ukrainian-American, born in New York City, has a degree in Fine Arts, and is a poet, artist, journalist and TV producer. She has received a National Endowment for the Arts Award, two Wisconsin Arts Boards Awards, a Co-Ordinating Council of Literary Magazines Writers Award, and an Art Futures Award, among other honors. She was the originator and producer of Where The Waters Meet, a local TV series created to facilitate the voices

of artists of all genres in the media, for which she won two national and twenty local awards, including a Commitment to Community Television Award. She is also a contributing editor to the annual Pushcart Prize Anthology, the recipient of an Outstanding Achievement Award from the Wisconsin Library Association, and has published four books of poetry. She currently reviews movies for , music forhttp://www.musicroomreviews.com, and books for http://www.bookroomreviews.com.

Tags: Of Dolls and Murder

I Know My Dad Loves Me by Scott A.Williams a book Review