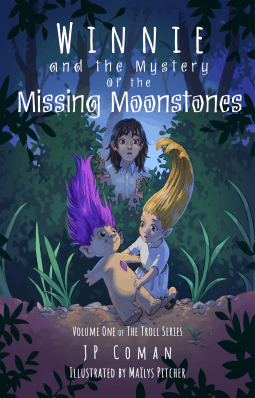 brother Jerry argues with Winnie and teases her and then looses her favorite troll doll, Binky out the back car window and the adventure begins.  Winnie’s favorite troll doll, Binky, is lost and their worlds collide in a way.  Winnie misses Binky and when they reach the very last campsite she goes off on a search for Binky.  At the same time a real troll on a mission finds Binky and they each see each other.  Questions on both sides are asked and this is a book of showing understanding to all who believes and disbelieves and slowly becomes a believer.
The author J.P. Coman has written a story that is descriptive in how he sees being a parent and still sees the child’s side of growing up.  “Winnie and the Mystery of the Missing Moonstones’ is a story of discovery of oneself and learning about acceptance.  The illustrations by Mailys Pitcher follows the words in a visual sense as with the picture of the whirlpool.  ‘Winnie’ is also a book of learning to really listen to another and understand.
Teachers and even counselors could use this book as a drama play activity to show one’s various relationships- father/children; child/troll; sister/brother.

Dad’s decision to go camping late in the season leaves Winnie and Jerry with nothing to do but bicker and annoy each other. But when Winnie storms off in anger, she accidentally rescues a real live troll! All their moonstones were stolen, and they need Winnie’s help to get their magic back!

Winnie and Jerry start off on a whirling adventure with their new friends, Oola and Humphry, and encounter new dangers with each step of their journey. Even if they find the treasure, how will they get home?

Winnie and Jerry Carver are on a camping trip with their Dad. Everything is turning out bleak for Winnie, who didn’t want to go in the first place, and is heartbroken when her brother lets her troll doll fall out the window of the car while they are driving on a bridge over a steep ravine. When she meets up with a real-live troll and discovers that trolls are little living people, magical things start happening. But then they find out that the troll population is in serious trouble, and perhaps Winnie and Jerry can help.
This book is designed for young readers at about age 8,9, and 10. The pre-Harry Potter crowd. But even grownups can enjoy the story and characters, which leave many memorable scenes with the reader.

The writing team of J P Coman consists of a married couple who have raised three children and use their experiences to create characters and situations that people can identify with.

J has been writing poems since age 6 and has written comic strips, stories, puppet theater, plays, screenplays, and now his second book. One of his screenplays was a Star Trek teleplay for ST:TNG, which was submitted for Paramount to consider. He is married to P, the co-author of the Troll story. Among his many interests are music, videography, theater, TED talks, Catholic bible studies, science fiction, and enjoying audiobooks. Her interests include church ministry, pediatric physical therapy, spiritual writing, inspirational talks, and gourmet and Cajun cooking. They both enjoy camping, cruising, and outdoor grilling. And apparently his dishwashing skills are beyond compare.

J is past president of the West Texas Writers of Midland, Texas, and has been the editor and publisher of newsletters such as the Houston Epson User Group, the Acadiana Area Apple User Group, the Houston Mirror, the Midland Memoirs, and Lafayette Lagniappe. He has also written over 50 songs, one of which was used in his play “Mirror, Mirror” which he produced at the Playwright’s Theatre of Louisiana.