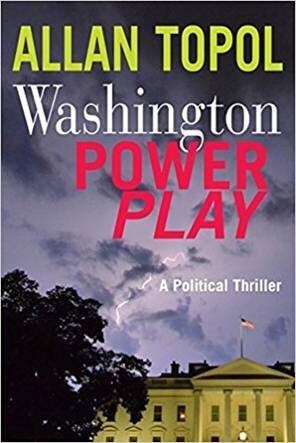 Talk about timely it’s eerie how Washington Power Play mirrors what is going on in Washington right now. If I didn’t know better I’d say Author Allan Topal was some sort of psychic (or maybe an undercover CIA operative) Who’d a thunk it? Imagine a foreign government trying to manipulate the United States presidential election! 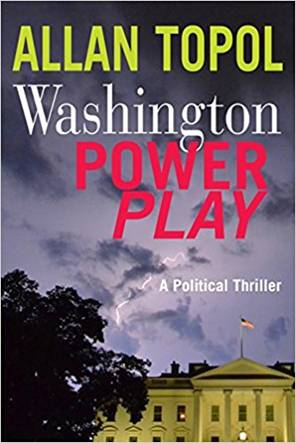 I’d say this is a cross between a John Grisham novel and something by Tom Clancy. It deals in both the Legal world and the world of international intrigue and espionage. Not to mention the political corruption we see so often in the real world . If you like strong female characters this one just might be for you .  FBI agent Kelly Cameron starts the book off with a bang as she stops terrorist attack on the Walter Reed hospital . This in turn gets her noticed as she then gets assigned to head up an investigation on finding a traitorous mole that is leaking classified information. The reader might be surprised by the result although I did figure it out.It’s nonstop action as you figure out the answers. I like a Thriller that gets to the action right away. You don’t have to wait long here. Then the intrigue and suspense starts.

This book is loaded with Espionage, deceit,backstabbing,with a little kidnapping involved. Well written,compelling and believable characters both good guys an bad guys are fun to read. Amazing how true to life this seems especially with the Trump /Russia thing going on.Normally I’d read something like this and while enjoying the book would not really think it would really happen.It’s all quite scary.

1. Do you feel WASHINGTON POWER PLAY is timely in today’s political world?

Washington Power Play deals with an effort by the Chinese government to influence a US presidential election. Right now, no topic could be more timely than a foreign government’s attempt to influence a US presidential election. The lead story in the media day after day is whether Russia influenced the election of President Trump.  Two years ago when I wrote Washington Power Play, dealing with China’s effort to control the election of the US president, I had no idea that my book, when published, would be so timely.

2. Where did you get the idea to write about a plot initiated by a foreign government to support a candidate for President of the United States?

I am and have been an attorney in Washington and a partner in one of the most influential law firms in this city. Though I have never held a position in government, I have been on the fringe of our nation’s political process.  In this position, I have observed how vulnerable our presidential election process is to outside manipulation by those with large amounts of money who want to elect a president who will support their agenda. Starting with this fact, it was a relatively small leap to ask what if the Chinese government wanted to manipulate the election to put someone in the White House who would support their agenda. That is the premise of Washington Power Play.

3. Do you feel  it mirrors what is being discussed about Russia today and President Trump?

Washington Power Play goes one step beyond what is being discussed about President Trump and Russia in the media. In Washington Power Play, the foreign government involved, namely China, has selected the individual, General Cartwright, an American military hero, who they would like to be US president , encouraged him to run, and arranged financing for his campaign.  Cartwright, a complex character, does not view himself as a traitor.  Rather, he is convinced that he is advancing an agenda in co-ordination with the Chinese which he believes is in the best interests of the US.

As the twenty first century is evolving, China has emerged as the primary rival of the United States economically, militarily, and diplomatically. The Economist wrote on April 1, 2017, that China is challenging the US for the world leadership it has exercised since the end of World War II. In this effort the Chinese have launched wide ranging spy efforts in the United States. Two examples were uncovered recently.  One involved a high level career official with the State Department who accepted cash and gifts for many years to pass classified US political and economic information to the Chinese.  The other involved an American energy engineer procuring nuclear know how for the Chinese.  These are only two examples of real life Chinese espionage in the US which is a critical part of Washington Power Play.

5. What goes into your research for your book?

I read a great deal about history and geopolitical events throughout the world. I also travel to foreign locations to obtain background for my novels. I have been to China, France, Israel, Italy, Spain, Argentina, and Japan, among other countries researching my novels.  Also, the internet is a wonderful source of information that enhances research.

For Washington Power Play, I not only visited China, but immersed myself in China political, military and strategic matters both in books and on the internet. I spoke with people possessing China expertise.  In addition I read biographies of Chinese leaders such as Deng and Mao to understand what was motivating them as they led the Chinese effort to surpass the US.

6. What background do you have in understanding power in  DC?

For more than thirty years I have been a partner in one of Washington’s most influential law firms.  In my work, I have argued in the Supreme Court and many lower courts. I have dealt with numerous governmental agencies. I have spent time and worked with individuals holding positions at the highest levels of the US government and some foreign governments as well as those in the media.  From this close contact and involvement, I have observed the exercise of power inside the Beltway. I have watched the unfolding of the never ending crises, including in fighting, struggles for power, the pursuit of personal agendas, corruption, and sexual scandals that grip Washington in every Administration.  All of this was very helpful in writing Washington Power Play.

7. What motivates you to write of international intrigue?

I write novels because I care deeply about geopolitical affairs. Fiction is a very effective vehicle to convey ideas about geopolitical issues.  My goal is to entertain readers with page turning suspenseful novels, with strong characters, male and female, like Kelly Cameron, the protagonist of Washington Power Play. At the same time I want to educate readers, not with characters who lecture but with the unfolding story.

8. What’s the best advice you received about writing ?

The best advice is: make your novel a page turner, make your readers want to know what happens next, and create compelling characters. To achieve this, I recommend that you start with a three sentence synopsis of your story.  Then prepare a detailed outline, scene by scene.  Mine are typically 40 or 50 pages.  When you write, you may not follow this outline precisely, but it is critical to have the blueprint.  You would not build a house without detailed plans. Once you have the outline, prepare profiles of your three or four main characters, what they look like, their backgrounds, personalities, and strengths and weaknesses. Make them compelling.  You must get to know them yourself.  When you have done all of these things, you can begin to write.  Also write your first draft in a white heat—straight through to the end. Do not revise until you have completed the first draft.

9. Where did your characters names come from?

For the names of the Chinese characters in Washington Power Play, when I was at the Aspen Music Festival, I studied the names of the Chinese musicians in the programs for various events.  For foreign names, I use history books about the country as a source.  More generally, I try to pick names which seem to me like the characters they represent.  Occasionally, I use the name of someone I know.  For example, in Spy Dance, I used Sagit for the name of my main Israeli intelligence agent. Sagit was the name of a good friend of my daughter in school; her father had been a military hero.

10. Anything new  on the horizon? What will it’s location be?

My next, fourteenth novel, will again feature Craig Page and Elizabeth Crowder as the protagonists.  They were the lead characters in five of my prior novels but did not appear in Washington Power Play.   That next novel will be focused on Hungary and much of the book will take place in Budapest which I visited last fall. Part of the action will also take place in Paris, Tel Aviv, Moscow, and Washington. After that, I am developing a story that revolves around Iran.