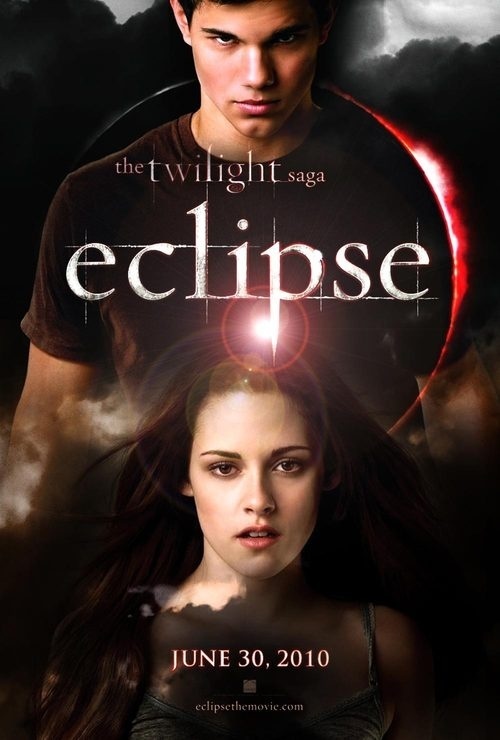 I have a spoiler link that I wanted to share from this website I enjoy reading (link is below).  If you have read the book, which is probably over 90 percent of the Eclipse Movie viewers, then you already know the story.  It is still fun to read all of the reviews online and I made it easier for you by linking some of them together here.  I plan on going this weekend.  Eclipse is getting some good reviews for a change.  Have you already watched it or do you plan on going?  I would love to hear your thoughts on Eclipse too.

“There is a new tenderness and sweetness that Stewart brings to her relationships – more playful with Pattinson, more affectionate with Burke (especially when Charlie tries to have “the sex talk”), and more intense with Lautner. Bella doesn’t want to let down anyone, and Stewart makes sure she doesn’t. But it’s Lautner, in particular, who has grown, giving Jacob an emotional interior nearly as hard-packed as those abs, which are very much on display.”

“This is definitely the most romantic of the films, although some of these scenes are set in flower-filled meadows that bring to mind feminine-hygiene commercials. The action sequences are harder-edged, and occasionally exciting, especially the scenes of vamps who sprint and run in mid-air, as if in flight. But it’s still hard to see what all the fuss over ordinary Bella is about. And that inexplicable fuss is at the core“

“It took three films, but “The Twilight Saga” finally nails just the right tone in “Eclipse,” a film that neatly balances the teenage operatic passions from Stephenie Meyer’s novels with the movies’ supernatural trappings.  Where the first film leaned heavily on camp and the second faltered through caution and slickness, “Eclipse” moves confidently into the heart of the matter — a love triangle that causes a young woman to realize choices lead to consequences that cannot be reversed.”

The movie contains violence and death, but not really very much. For most of its languorous running time, it listens to conversations between Bella and Edward, Bella and Jacob, Edward and Jacob, and Edward and Bella and Jacob. This would play better if any of them were clever conversationalists, but their ideas are limited to simplistic renderings of their desires. To be sure, there is a valedictory address, reminding us that these kids have skipped school for three movies now. And Edward has a noble speech in which he tells Bella he doesn’t want to have sex with her until after they’re married. This is self-denial indeed for a 109-year-old vampire, who adds a piquant flavor to the category “confirmed bachelor.”