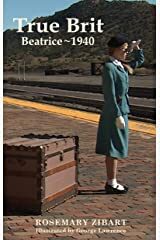 Rosemary Zibart and George Lawrence
2011
ISBN: 978-1-932926-18-7
Kinkajou Press
www.kinkajoupress.com
info@artemesiapublishing.com
206 pages
‘True Brit’ shows all the characteristics of what a true British citizen would be like during the time 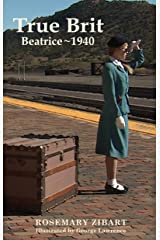 period of the Second World War, but even what a British citizen would be like today. During the bombing of England at the beginning of the war English children were sent to America for their safety.’True Brit’ is the story of one of those children.

Beatrice is a proper British citizen who needs to make some decisions on how she would like to be seen by the others while adjusting to her new home in America.Santa Fe New Mexico is certainly not London. Beatrice is a character that readers will look up to and begin to understand how life changes or become standoffish as Beatrice first appeared to be to others.

drawn by George Lawrence were pencil sketches, but were well developed and they
described the scenes as written by Rosemary. Beatrice is a person who figures out a way to fit in with
her new surroundings, but at times she has many questions about her family in England and now her
family in the United States.

True Brit is a book that can be used in the classroom to introduce the topic of World War II and the trials people had to endure.It shows how Beatrice learns that everyone needs to work together to achieve various results in times of distress whether political and/or emotional. My favorite parts of the book were the letters that Beatrice received from England as well as the journal Beatrice is keeping to show her father her many adventures and what she is learning in her home away from home. ‘True Brit’
is a story of making adjustments in our lives.

In 1940, Beatrice Sims, a spoiled English girl arrives in Santa Fe to escape the war in London. At first the twelve-year-old hates the dusty little town. But soon Beatrice makes friends with goofy Arabella, develops a crush on handsome Esteban and aids Ana, a shy Indian girl. First accused of being faceta – stuck up, Beatrice learns to change tires, ride wild ponies and helps the public health nurse, Clementine Pope, rescue a sick baby on an Indian pueblo.

A former journalist, Rosemary Zibart writes plays for adults and books for young people. Her middle grade novels TRUE BRIT and FORCED JOURNEY feature children impacted by WWII. Both books won the NM-AZ Book Award for Historic Fiction in 2013 and 2016 and also both won a Silver Nautilus Award for books that inspire readers to envision a better world. She’s written two picture books: I HAVE A GRANDMA WHO…that celebrates active, involved, loving grandmothers and KIT COYOTE: A BRAVE PUP that empowers children in foster care to express themselves, talk to trusted adults, make new friends, and adjust to a challenging situation.

Ignite Your Book a new place to shop for ebooks