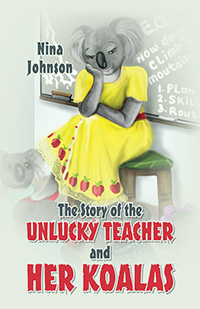 This is a story about a teacher-who is given the nickname-“The Unlucky Teacher”.  Why?  Because she had a class of Koalas, who were different then the other kolas in the other classes because these Koalas has no arms or legs.  The other teachers felt that the koalas in “The Unlucky Teacher’s class” would not succeed or be able to do things as the koalas in the other classes.  At the end of each school year, the teachers had to enter their kolas in “The big mountain climbing contest.”  For this contest-The other teachers and village people pitied this  unlucky teacher (who had no arms or legs) in having to enter her kolas.  The others felt for sure that the koalas would not win or even be able to climb up the mountain.  This teacher was not at all worried about entering her koalas in the mountain climbing contest.  She was a caring, kindhearted teacher who felt that her students would be able to succeed in this contest despite their differences.  She teaches her students to compete in this competition with what they already have.

I think this was a great book.  The koalas in this book represent some students that have differences today such as learning  disabilities, physical impairments, high risk kids, ect…There is a quote that I love in this book:  “She knew that she had to teach them, (kolas) to use what they had to get what they needed…that success was not about doing it everyone’s else’s way, but doing it the best way that will allow them to achieve their goals.” This quote shows the reader that this is a very caring teacher who believes in her students’ success despite their differences.  There are many different types of students in today’s school systems: Gifted students, students with learning disabilities, physical disabilities, ones that come from poor families, students that have behavioral issues, and the list goes on.  Today, you have educators who believe that all students have the ability to learn and be successful Nina Johnson and other educators who don’t always see this.  I think it is important for students to have teachers who care and believe in their students as this can be crucial to the students’ success.  If an educator does not believe in her students, then those students will lack self esteem and will have trouble believing in their own success.  As stated on the back cover of this book, “Warm-hearted and inspiring, this story illuminates the importance of having teachers who truly believe that all students can achieve high standards of academic success. ”

About the Author:  Nina Johnson is a passionate educator who started her teaching career as a high school English teacher in 2001.  As a former English teacher and literacy coach, she cultivated her love for helping enhance students’ lives by tapping into their natural ability to learn.  She also impacted the lives of educators and students through her work as a middle and high school academic literacy coach for the Enrichment Region and is currently having an even greater impact as the academic coach for the Southeastern Region of Guilford Country Schools.  Nina earned her AA in General Studies from Patrick Henry Community College, her BA in English from Longwood College, and her MS in rehabilitation counseling from North Carolina Agricultural and Technical State University.

Bitter and Sweet by Sandra V. Feder and Kyrsten Brooker