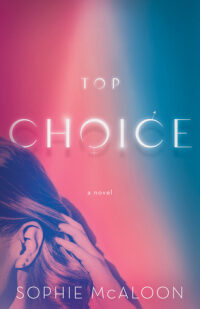 This spring, Canadian-based indie author Sophie McAloon launched her debut YA novel in the United States, TOP CHOICE (April 24, 2018), an exciting and thought-provoking story of first love and rebellion that takes place in a near-future world where strongest and biggest and most ruthless has been replaced by smartest and fairest and most committed.

Best described as “The-Handmaid’s-Tale-Meets-Magic-Mike,” TOP CHOICE couldn’t have come at a better time. With the powerful surge of the Time’s Up movement and focus on gender equality, there’s a huge wave of interest again in dystopian stories depicting worlds where women are suppressed or objectified and battling to come out on top. But what if we reversed these all-too-common stereotypes? What would that world look like? What if, God forbid, women took our current battle for equality to a shocking extreme—how would guys handle being on the flip-side of the coin? Well then you have the timely yet perfectly fraught and even controversial backdrop for the world of TOP CHOICE.

In the current setting of politics and shows like The Handmaid’s Tale, Top Choice was quite the interesting shift in perspective. Too often we see dystopians where female characters are put down and treated improperly, but what if it was the other way around? There is plenty of objectifying of not just women but men as well, so what if it was all combined in a future society?

That premise alone is what drew me to this book. The writing style was well done and easy to follow. I enjoyed the descriptions of setting and character, and McAloon seems to be able to get into her character’s heads well. She did well with fitting her character’s attitudes and personalities to the society they’ve grown up in, instead of taking characters that existed in today’s society and tried to fit them with a future government.

There were plenty of surprises to keep me on my toes which I highly enjoyed. There’s always a rebel group going against power in futuristic settings, and this one is no different. But the fact that the main love interest has a double life just brings depth to his character instead of him being the typical ‘cute boy’ stereotype that the others like him seem to fall into.

Overall, great work. Would definitely read this one again.

As a future leader of the female-led regime her grandmother fought hard to establish, Alice Kearns is no stranger to pressure. Being the best in a society where women are expected to be high-achieving is the only option her powerful mother has ever accepted for her, and now that Ali’s a senior in high school, the pressure to succeed is greater than ever. But fortunately, as of her eighteenth birthday, Ali has a place to blow off steam: she’s finally allowed into the Choice Clubs.

Filled with an enticing mix of music, drinks and gorgeous guys, the Choice Clubs were founded to ensure that smart girls wouldn’t get distracted in their real lives by anything as trivial as a shallow crush or a pretty face. Choice guys are fun, flirty, and the perfect eye candy, but Ali would never dream of actually falling for one—until she meets Tag.

Tag McPhail is Top Choice. With his mischievous grin and chiseled abs, he is exactly the kind of boy that Ali’s mother believes needs to be kept contained. But after he kisses Ali at the Choice Club, she suddenly sees him everywhere—and she’s surprised to learn that there’s more to him than his perfect looks. Tag is sweeter, smarter, and funnier than Ali ever expected… and, she soon discovers, he’s also dangerous. Because Tag leads a double life: when he’s not working at the clubs, he’s leading a rebel group trying to overturn the girl power society that the women in Ali’s family have worked so hard to put in place.

Getting closer to Tag upends everything Ali thought she knew. But will she betray everything she was raised to protect for a guy she’s not even sure she can trust?