The Yearbook by Carol Masciola 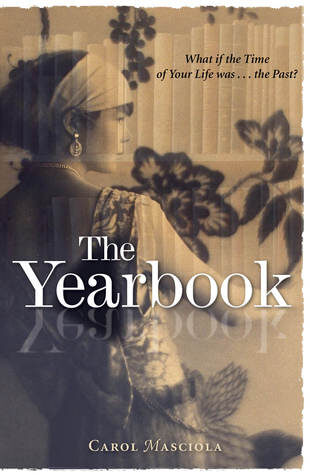 Misfit teen Lola Lundy has every right to her anger and her misery. She’s failing in school, living in a group home, and social workers keep watching her like hawks, waiting for her to show signs of the horrible mental illness that cost Lola’s mother her life. Then, one night, she falls asleep in a storage room in her high school library, where she’s seen an old yearbook—from the days when the place was an upscale academy for young scholars instead of a dump. When Lola wakes, it’s to a scene that is nothing short of impossible.

Lola quickly determines that she’s gone back to the past—eighty years in the past, to be exact. The Fall Frolic dance is going full blast in the gym, and there she makes an instant connection with the brainy and provocative Peter Hemmings, class of ’24. His face is familiar, because she’s seen his senior portrait in the yearbook. By night’s end, Lola thinks she sees hope for her disastrous present: She’ll make a new future for herself in the past. But is it real? Or has the major mental illness in Lola’s family background finally claimed her? Has she slipped through a crack in time, or into a romantic hallucination she created in her own mind, wishing on the ragged pages of a yearbook from a more graceful time long ago?

There is so much going on in this one, but I ended up loving it the second I got started in on it. Our narrator, Lola, at first seems like she’s just a bit of an outcast student. But, there’s something big that haunts her past: her mother was diagnosed with schizophrenia, and her social workers are always wondering if it’ll be passed down to her.

Besides the standard teenage delinquency, Lola seems fairly normal. That is, until she’s tasked with cleaning an old, burned out room in the school library. It’s there that she travels back to 1923, meets a handsome young man at a school dance, and determines that she was actually meant to live in the 20th century. That, or the schizophrenia has finally taken over and she’s gone crazy. You really can’t tell, and that’s the fun part of having an unreliable narrator.

Honestly, this had me completely hooked in and believing that everything Lola was seeing was the real deal, all the way until the adults around her begin questioning her and poking holes in her story. Even Lola can’t decide what’s real and what’s not at one point. Either way, Masciola manages to capture the longing for a place that every outsider feels, alongside the complications of a mental illness that has everyone questioning your motives. Lola’s story in 1923 is also very sweet, although the only thing that I did find somewhat unbelievable was that fact that people accepted her immediately. You’re from New York and bought your shoes in Paris? Great! You grew up at a mining camp in Colorado! Perfect, makes total sense. I mean, maybe (probably) people were quicker to trust back in those days, so it could be chalked up to a shift in culture.

Definite read-again. I was kindly provided this book for free in exchange for an honest review.

Look for The Yearbook here

How To Make Homework Time Fun

The Adventures of Fawn—‘Til the Last Snowflake Falls