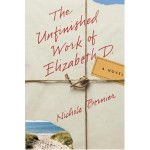 Elizabeth, who dies in a plane crash in her late 30s, leaves an antique trunk filled with her journals to her former neighbor and friend, Kate. As Kate begins to read Elizabeth’s journals after her death, it seems that Elizabeth was having an affair (and didn’t tell anyone else about it). There are notebooks going

back to when Elizabeth was a child in 1976 and her younger sister died. Kate fears Elizabeth’s inner revelations, the things that we never tell anyone else from “a mother who had embraced each day as parenting magazines advised because the children would be grown up before you knew it.” Kate also finds out (as she proceeds to read the journals in order, as Kate has requested in a note to her lawyer), Elizabeth’s feelings about her sister Anna’s death. “It’s like having a sister get killed is contagious and I’m glowing with it. I wish I could move away.”

During a vacation on Great Rock Island, Kate reads more and more, suddenly discovering a person she now finds out that she’d barely known. There’s a boy who smiles in class at Elizabeth, Michael, and she’s smitten with him even though he doesn’t seem to care about her, and something happens with Michael that changes Elizabeth’s life. Elizabeth goes to study art in Florence, Italy, but comes back when her mother becomes critically ill.

During Kate’s reading of Elizabeth’s journals we learn about Kate’s life too, how she had been a pastry chef and met her to-be husband Chris in New York (where he was a hotel developer). They married and had two children, James and Piper, and Kate stopped working and stayed home with the kids (since being a chef required grueling hours). Elizabeth also eventually married Dave (a professional golfer) and had Jonah and Anna, after which she only did free-lance graphic design from home. Kate struggles with whether she should return to work now herself.

Reading the journals, one-by-one, Kate is waiting to see if Elizabeth had actually been unfaithful to Dave, and if so, why. Dave takes an interest in the journals, too, and feels that they are rightfully his because they were written by his wife. Even though Elizabeth has not said in detail what Kate should do with the journals, Kate takes her responsibility seriously (because maybe Dave was never meant to see them).

Nicole Bernier has created a sensitive portrayal of a woman trying to figure out and understand her own life while simultaneously given the task of rediscovering a friend that she thought she had known more completely. Conjecturing until the end, Kate is startled with the wisdom or what really happened in Elizabeth’s life, and she muses about coincidence, genetics, fate and destiny. Were Kate and Elizabeth’s choices to stay home and raise their children rather than to more fully pursue their careers (as their husbands did) what either of them should have been doing? Would men have made the same choices?
An interesting work that holds on to its secrets until the very last moment.

The Unfinished Work Of Elizabeth D., a novel by Nicole Bernier, published on 6/5/12 by Crown Publishers, 320 pages.

Christina Zawadiwsky is Ukrainian-American, born in New York City, has a degree in Fine Arts, and is a poet, artist, journalist and TV producer. She has received a National Endowment for the Arts Award, two Wisconsin Arts Boards Awards, a Co-Ordinating Council of Literary Magazines Writers Award, and an Art Futures Award, among other honors. She was the originator and producer of Where The Waters Meet, a local TV series created to facilitate the voices of artists of all genres in the media, for which she won two national and twenty local awards, including a Commitment to Community Television Award. She is also a contributing editor to the annual Pushcart Prize Anthology, the recipient

of an Outstanding Achievement Award from the Wisconsin Library Association, and has published four books of poetry. She has reviewed music for Music Room Reviews, films for Movie Room Reviews, Movie Scribes, and FilmSay, and is currently reviewing books and films online for Book Room Reviews, whose address is www.bookroomreviews.com.

Spread the love
Tags: The Unfinished Work Of Elizabeth D.