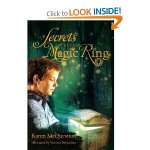 “In the garage, the box, still wrapped up in the tarp, rested comfortably on the shelf. To the casual observer it would appear to be just a dirt-covered box, but inside, where no one could see, the box was awakening. It had been underground waiting to be discovered for a long time. Finally, finally the magic inside the box would get to make its way out into the world.”

Karen McQuestion writes amazing stories for children (and also novels for adults), and you may want your kids to read her previous book, Celia And The Fairies. In Secrets Of The Magic Ring (beautifully illustrated by Vincent Desjardins) Paul find a box in the hole that is being dug for his family’s backyard swimming pool, and he is suddenly visited by a strange and threatening boy named Henry, who wants Paul to give him the box (but Paul doesn’t). Inside is a magical ring for making wishes (which Paul at first keeps secret from everyone), but Paul soon finds that it comes along with its own series of problems.

“This ring bestows on the wearer their most fervently wished-for ability, even beyond normal capabilities. One use per wearer,” reads a note that accompanies the ring. Paul has no idea what this means. On the ring itself is inscribed “Be selfless.”

Paul’s Aunt Vicky has a hilarious escapade with the ring, and Paul’s friend’s Celia’s grandmother is reminded of a special ring like it from long ago. Fairies get involved, as does Paul’s dog Clem. Henry, the strange boy who demanded the ring, has a compelling need for it, and Fairy Jasmine has to figure out how to help everyone. The ring has a history that involves people that Paul knows, and when it becomes his turn to wish, Paul is just as foolish as everyone else, although his wish is one that many boys have. Fairy Jasmine has her hands full trying to find a way to solve these human’s problems.

In her children’s books Karen McQuestion teaches children that what they say and do is very important, and that their actions have  consequences. She shows them that they don’t always have to follow rules exactly but that getting help from adults, especially in the form of advice, is important (as Grammy helps the children in this story). Most of all, children learn that they can have an effect on those around them, and that being a child isn’t the same as being powerless. Bravery and thinking through problems are important factors in their lives.

Karen McQuestion is also a master at keeping secrets (so we’re always surprised at what happens next) and in moving a plot forward through constant thought and action. Her characters speak and think naturally and seem to be like people that all of us already know. She shows us that unusual things can happen in our lives that can either be detrimental or beneficial to us, depending on how we handle certain situations. But her stories are never preachy and they never seem like dull lectures. We are excited, while reading Secrets Of The Magic ring, to find out what will happen to the children, and we can easily imagine ourselves in the same situations. We learn that even if life becomes difficult, we can get through most things or even change them. The idea that we have unseen helpers (like fairies) is comforting also.

Wisdom often comes through experience, and Paul, Henry, Celia and Alex get to experience quite a bit in Secrets Of The Magic Ring (and through them, we get to vicariously experience their travails and joys). Life is an adventure, and Karen McQuesiton definitely makes us feel this way through her writing. Highly recommended (and I included this book in my 2011 Holiday Book-Buying Guide) for children (and even for their parents!).

Secrets Of The Magic Ring, a children’s book by Karen McQuestion, published by AmazonEncore on November 8, 2011, 156 pages.

Christina Zawadiwsky is Ukrainian-American, born in New York City, has a degree in Fine Arts, and is a poet, artist, journalist and TV producer. She has received a National Endowment for the Arts Award, two Wisconsin Arts Boards Awards, a Co-Ordinating Council of Literary Magazines Writers Award, and an Art Futures Award, among other honors. She was the originator and producer of Where The Waters Meet, a local TV series created to facilitate the voices of artists of all genres in the media, for which she won two national and twenty local awards, including a Commitment to Community Television Award. She is also a contributing editor to the annual Pushcart Prize Anthology, the recipient of an Outstanding Achievement Award from the Wisconsin Library Association, and

has published four books of poetry. She
currently reviews movies for , music for , and books for .

The Happy Mind A Simple Guide to Living a Happier Life