Partitions: A Novel by Amit Majmudar

by Amit Majmudar, published by Metropolitan/Henry Holt And Company on June 21, 2011, 224 pages.

Part ghost and part guardian angel, Dr. Roshan Jailly, a Hindu, watches from the spirit world as his twin sons Keshav and Shankar, who are still very young, are separated from their mother Sonia at the train station. It is 1947 and through the proclamation of 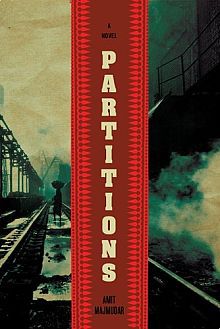 Partition a new border is declared between India and Pakistan, with people clamoring from both sides to make their way to the other. The children, dressed in blue and green silk shirts (all the clothes they’re allowed to take with them are those they’re wearing) begin their search for their mother and are soon on a journey they never expected to have. Down the line their lives will intersect with Simran’s, a devout and pure Sikh girl who is momentarily captured by three thieves and thrown into a truck to be sold as a prostitute, and Musad,a Muslim doctor who seeks to heal others, no matter what their religion.

Partitions is particularly descriptive (with little dialogue) and shifts around in time as our spirit narrator tells us about the chaos and bloodshed among fleeing refugees. The old, the poor, the young and the formerly rich are pitted against each other, all struggling to escape to be among their own kind and wishing for the peace that preceded this governmental issue. Dr. Roshan Jailly remembers the last part of his life in which, already divorced once, he takes up with the ward of a church, a cleaning girl called Sonia (and he is three times older than she is) from the Untouchable caste, and marries her. Because of this marriage his proud Sikh family abandons him, sending only his father’s sister Damyanti to name the two boys, as is the custom. Shankar is physically weak but Keshav is sturdy, and Shankar breaks three ribs in the train incident, rendering him even more helpless.

Do the boys find their mother? Does Simran live a life alone after having been touched by male strangers? One can only imagine many more instances of strife that occurred in real life during this historical upheaval. Yet Masud, who stutters and finds it easy to talk only when he’s with children, ministers to the ailments of all, just as he had learned to do when in medical school with Dr. Roshan Jailly. Girls like Aisha, forced into prostitution and now not participating in their own lives but spending their time mentally blocking out their sad and unfair experiences, were some of the worst casualties. And we are glad to see some justice, however faint it may be, when robber Saif is attacked by a group of starving dogs.

With a fierce understanding of both the lower and higher forms of human nature, Amit Majmudar has recreated a desperate atmosphere through which individuals run, often lost and not knowing where they’re going. How people appear is not always who they are in a huge river of humanity where “the river is heading for the falls” and where, haphazardly, justice sometimes prevails. Amrit Majmudar is a bold new voice among writers, swathed in silence musings and philosophies about what happens to us in life when we’re at the mercy of others, and how we respond to vast challenges. A highly unusual novel.