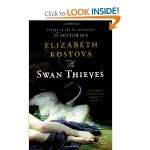 The Swan Thieves is a book interwoven, like a rich tapestry, with the stories of men and women in the present and the past, showing how the centuries reflect each other. The Swan Thieves presents the concept of romance (so not-post-modern) where one woman and one man enjoy the sensualities of eating and sleeping with one another and the thrill of wanting to conceive a child.

Robert Oliver, an artist, is caught in the Metropolitan Museum of Art with a knife, trying to stab a painting, and is placed in a psychiatric institution where Andrew Marlow, both a psychiatrist and an artist, takes an interest in his case. Robert, who is very talented, refuses to speak and keeps sketching and painting the same woman, Beatrice de Clerval, a little-known 19th century painter, while reading a packet of letters in French over and over again, Beatrice’s correspondence with Olivier Vignot. Marlowe sets off on a journey (little knowing how it will impact his own life) to solve the mystery of why Robert acted as he did.

Marlowe talks and visits at length with Kate Oliver, Robert’s wife, and Mary Bertison, his art student and short term lover. The chapters are cleverly bundled into voices by one person, Marlowe or Kate or Mary, interspersed with Beatrice’s and Olivier’s correspondence from 1879, again an interesting weaving. One day Kate discovers sketches in Robert’s studio of Beatrice in 19th century clothing (although she doesn’t know who Beatrice is at the time) and wonders if Robert is having an affair. Robert continues to paint Beatrice for years, traveling to France to find out more about her, and Kate is left in the shadow of his obsession, finally throwing him out, wherein he flees into the willing arms of Mary.

The characters in The Swan Thieves are carefully detailed and art references to painters and sculptors abound. One feels as if one is actually there, becoming one character or another, even becoming Marlowe, who seeks substance for his unfulfilled life. “Have you ever had this feeling that the lives people lived in the past are still real?” Robert asks Mary, thinking of his immersion into Beatrice’s life, who is from such a different time that she may as well have been fictional to him.

The Swan Thieves, ultimately a story about both beauty and greed, is complex in plot and one never guesses its ending until faced with it. The aspirations and yearnings and daily lives of characters in the present mimic those of people in the past to an unusual degree. The questions of what is more important, art or life?, and, by leaving parts of ourselves in our artwork, for the future, do we become immortal?, come up constantly. To those outside the artistic life-style, the underlying processes will become intimately known to them, and others will nod in understanding at painting passionately, cleaning brushes, and spending hours and even years on one work. A tome at almost 600 pages, certain to keep our attention once we’ve started reading it, The Swan Thieves also begs the question, if nothing in the present intrigues us, should we delve into the past to entrance us?

The Swan Thieves by Elisabeth Kostova, published on November 3, 2010 by Back Bay Books, 592 pages.

Reviewed by Christina Zawadiwsky
Christina Zawadiwsky is Ukrainian-American, born in New York City, has a degree in Fine Arts, and is a poet, artist, journalist and TV producer. She has received a National Endowment for the Arts Award, two Wisconsin Arts Boards Awards, a Co-Ordinating Council of Literary Magazines Writers Award, and an Art Futures Award, among other honors. She was the originator and producer of Where The Waters Meet, a local TV series created to facilitate the voices of artists of all genres in the media, for which she won two national and twenty local awards, including a Commitment to Community Television Award. She is also a contributing editor to the annual Pushcart Prize Anthology, the recipient of an Outstanding Achievement Award from the Wisconsin Library Association, and has published four books of poetry. She

currently reviews movies for , music for , and books for .

An Interview with Andrew Crofts