The Secret Life of Mrs. London by Rebecca Rosenberg 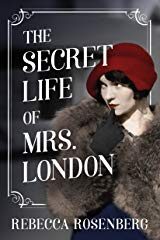 San Francisco, 1915. As America teeters on the brink of world war, Charmian and her husband, famed novelist Jack London, wrestle with genius and desire, politics and marital competitiveness. Charmian longs to be viewed as an equal partner who put her own career on hold to support her husband, but Jack London doesn’t see it that way…until Charmian is pulled from the audience during a magic show by escape artist Harry Houdini, a man enmeshed in his own complicated marriage. Suddenly, charmed by the attention Houdini pays her and entranced by his sexual magnetism, Charmian’s eyes open to a world of possibilities that could be her escape.

As Charmian grapples with her urge to explore the forbidden, Jack London and his   increasingly reckless behavior threatens her dedication. Now torn between two of history’s most mysterious and charismatic figures, she must find the courage to forge her own path, even as she fears the loss of everything she holds dear.

This is another one where I really like the cover! I love reading books that also make my graphic designer heart happy 🙂

I do like the historical basis of this one, early 20th century is one of my favorite time periods to read about. There’s something about the time just before the first world war that seems like everything is holding its breath. I did notice that the setting as lovely and very detailed, I enjoyed the small nods to what must have been quite a bit of research for this book.

Jack London was by far not my favorite character in the entire world. I think I’ve read maybe one of his books, but you could definitely tell he wouldn’t be much without Charmian supporting him. It was interesting to see the dichotomy between Charmian wanting to be a “liberated woman” of the time but also falling back onto the supportive wife role.

There was quite a bit of sleeping around in this book, which I can’t say I agreed with. But as this seems to have some historical basis, it makes sense that it made it into the prose. Overall, quite the good read. Not my favorite book of all time, but it was certainly entertaining nonetheless.