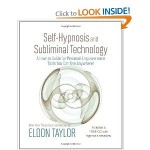 “Self-hypnosis can be carried out anywhere, at any time. It can be used to help you believe in a desired outcome, uncover information hidden by your subconscious, and access your higher self. Subliminal communication can also be used extensively and is perfect for replacing thoughts and ideas that don’t serve you with those that do. With this tool, you don’t even have to take time out to use the program – you can work on your self-improvement while going about

Thus writes Eldon Taylor, and a CD accompanies his book. The author encourages us to “tap into the nearly unlimited power within” and “experience the possibilities that lie dormant within you.”

We are also taught about change, and that “Conflicting strategies exist in nearly everyone.” Fear of the unknown is another factor as well as negative programming in our subconscious minds. Our defense mechanisms, that want to keep us from pain, humiliation and rejection, also keep us from change.

But Eldon Taylor believes that using hypnosis we can “seed” our minds with thought patterns that can help us resolve our inner conflicts and their sources. The brain state of hypnosis, he tells us, is surprisingly also “the state we all go into when we watch television” (as an altered state of mind from our usual beta brain waves). In this alpha sate, which is suggestive, people can be more easily influenced to buy commercial products.

We learn about visualization: how the mind can’t distinguish between imagined experiences (if they’re detailed) and real ones. Our minds take in vivid dreams as if they were real, and athletes visualizing themselves doing exercises begin to feel muscle tone.

Various techniques of self-hypnosis are explained to us, and they can help us with weight loss, relaxation, asthma, eating disorders, phobias and many other problems. We learn how to create our own subliminal self-hypnosis recordings to influence our conscious thinking.

Using very simple language (instead of difficult scientific terminology) that is easy to understand, Self-Hypnosis And Subliminal Technology is a useful guide to understanding the mind and how certain parts of it work. Techniques of forgiveness, self-confidence, and the breaking down of harmful beliefs are revealed. I highly recommend this self-improvement book, different from many others because it explains and touches our inner selves. As the author quotes Socrates, “The unexamined life is not worth living.”

Self-Hypnosis And Subliminal Technology, A How-to Guide For Personal Empowerment Tools You Can Use Anywhere!, by Eldon Taylor, published by Hay House on October 1, 2012, 202 pages.

Christina Zawadiwsky is Ukrainian-American, born in New York City, has a degree in Fine Arts, and is a poet, artist, journalist, critic and TV producer. She has received a National Endowment For The Arts award, two Wisconsin Arts Board awards, a Co-Ordinating Council Of Literary Magazines Award, and an Art Futures Award, among other honors.

She was the originator and producer of Where The Waters Meet, a local TV series created to facilitate the voices of artists of all genres in the media, for which she won two national and twenty local awards, including a Commitment To Community Television Award. She is also a contributing editor to the annual Pushcart Prize Anthology (and has received one herself), the recipient of an Outstanding Achievement Award from the Wisconsin Library Association, and has published four books of poetry and has had poetry and fiction in hundreds of literary periodicals. She has reviewed music for Music Room Reviews, films for Movie Room Reviews, Movie Scribes, and FilmSay, and is currently reviewing books and films online for Book Room Reviews at www.bookroomreviews.com while also showing artwork professionally.