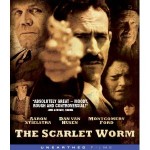 The Scarlet Worm, released on Blu-ray and DVD by Wild Dogs/MVD Visual on 4/24/12, is a western (some would say a sphagetti western), but a western for those with strong stomachs. Various forms of torture

are employed on victims that Print (Aaron Stielstra), who is unusually dressed for a cowboy in a black suit and hat and scarlet tie (and the actor is in real life Italian), is hired to kill. “That’s Mr. Paul’s cow. You’ve been changing Ps into Bs – not good business to be lying when you’re about to meet hte Lord,” Print tells a poacher who’s re-branded the cattle (and kills him and stuffs him into a dead cow as a statement to other would-be poachers). It’s 1909 on the property line of Mr. Paul’s (Montgomery Ford’s) ranch.

Print sees himself not as a mere murderer but as an “artist.” In-between killings he writes poetry. In court he’s found “not guilty,” since “Mr. Paul takes care of his own.”

Mr. Paul also wants Print to get rid of Mr. Heinrich Kley (Dan Van Husen) who runs a brothel out of his barn and performs abortions on his prostitutes. Print wants to comply but has to infiltrate Kley’s operation, so he gets a job as a cowboy on Kley’s ranch and also helps manage the girls. While there he teaches Lee (Derek Hertig), a ranch-hand, to write poetry, and tries to defend the females against Mr. Kley’s cruelty (and his operating table). The prostitutes claim that Mr. Paul would “bite, kick, and scratch” them and try to choke them. With the death of Mr. Kley, Print feels “I had painted my masterpiece.”

To say that The Scarlet Worm is an unusual western is an understatement. It began with a group of six movie afficianados (their stories are documented in Special Features) meeting on-line and finally coming together from various parts of the USA as Wild Dog Productions to write and create The Scarlet Worm. The group was able to lasso well-known old-time stars Montgomery Ford, Ted Rusoff, Mike Forest and Dan Van Husen to play parts in their western, with David Lambert writing an original script and Aaron Stielstra both acting in the film and composing music for it. They were “guys who got things done” and late 60s and early 70s Western film buffs with a low budget but plenty of workaholism to get things going (and an unusual sense of poetry).

They certainly created a dark and intense, “new territory” western where law and order is in the hands of those holding the guns, and those who have the guts to use them! A cult classic and a collector’s item.