The Psychology Of Wealth book review 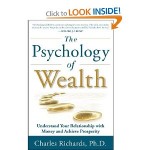 “It would be difficult to make financial wealth or any measure of true success without having an intact core sense of self. If you believe that having money will bestow on you a sense of self-worth, you will be caught in a classic Catch-22 loop in which self-esteem must be preceded by wealth, but wealth is possible only if you have self-esteem. Indeed, financial wealth does not automatically confer either self-esteem or self-respect. On the contrary, self-esteem and self respect seem to be prerequisites for achieving a life of true wealth and prosperity.”

Author Charles Richards, Ph.D., is a Doctor of Clinical Psychology and a licensed psychotherapist in private practice who has trained and coached the senior executives of many Fortune 100 corporations, so of course he knows what he’s talking about, as he goes on to say, “It is not possible to grant another person an authentic and durable sense of self-esteem – it is a quality that we gain through our own experiences.” Dr. Richards seeks to show us how to desire a more successful life, telling us that “simply by being alive, we are worthy. If our sense of self is damaged, shattered, or fragile, it can be strengthened.” He says that even Walt Disney, who received wealth and many honors and awards as he became an American icon, had a life “riddled with crushing setbacks, disappointments, financial failures, and occasional bouts of depression,” but he learned from his mistakes and from his adversity. If we stay positive and see ourselves as moving forward, we will be ready to use any opportunities that come our way. “And when you choose to make the smallest course corrections consistently, over time, you’ll begin to see amazing results” (quoting SUCCESS magazine publisher Darren Hardy). “A horse wins by a nose, but gets 10 times the prize money.”

Dr. Richards shows us how to distinguish high self-esteem from low self-esteem, how to evaluate our self-esteem, and how to use role models properly. Innumerable stories illustrate how to work hard to overcome difficult circumstances, and how to make the best choices for our individual selves. Keeping complete responsibility for ourselves is an important factor, including responsibility (as Victor Frankl states) about “what we think.” Although a Holocaust survivor, most of us know about the in-depth psychological writing that Victor Frankl created because of his war-time experiences.

Telling the story of Shefik Tallmadge, who won the lottery at age 29 ($335,000 each year for 20 years), Dr. Richards explains to us what can happen even if we have money. Tallmadge says, “I entered into the big shark pool, and I was the little minnow. The lottery did change my life. What I did with it afterward was the problem.” Shopping like crazy, Tallmadge eventually had to declare bankruptcy and now his wife “is the main breadwinner in the Tallmadge family, and he is a stay-at-home dad.”

Dr. Richards suggests that we reclaim our power, paying attention to our thoughts, words, actions and beliefs, and keeping them positive. Quoting Stuart Johnson, the owner of SUCCESS magazine, we learn that “Successful people, like Donald Trump, Suze Orman, and Oprah Winfrey, have tenacity. They can be knocked down, but they’re not knocked out. They have integrity, and they work hard. They put good people around them, and they always seem to really care about others.” Dr. Richards also believes that action is always preferable to inaction – it’s inertia that many of us need to overcome.

“Having a wealth psychology means that we feel grateful for what we have and acknowledge what we’ve accomplished. We know that generosity towards others is abundance in motion, and that giving creates more abundance in us. With this psychology, we accept that we’re responsible for what we create no matter what life may provide or remove along the way. We expect the best of ourselves, and we recognize that the golden path to true prosperity, to a life of happiness and fulfillment, begins by showing up and putting one foot in front of the other.” A valuable and optimistic book, The Psychology Of Wealth is abundant in ideas and theories that can take you well on your way to achieving your life’s happiness and goals.

The Psychology Of Wealth: Understand Your Relationship With Money And Achieve Prosperity by Charles Richards, Ph.D, published by McGraw-Hill on 12/20/11, 256 pages.

Christina Zawadiwsky is Ukrainian-American, born in New York City, has a degree in Fine Arts, and is a poet, artist, journalist and TV producer. She has received a National Endowment for the Arts Award, two Wisconsin Arts Boards Awards, a Co-Ordinating Council of Literary Magazines Writers Award, and an Art Futures Award, among other honors. She was the originator and producer of Where The Waters Meet, a local TV series created to facilitate the voices of artists of all genres in the media, for which she won two national and twenty local awards, including a Commitment to Community Television Award. She is also a contributing editor to the annual Pushcart Prize Anthology, the recipient of an Outstanding Achievement Award from the Wisconsin Library Association, and has published four books of poetry. She currently reviews movies for , music for , and books for
http://www.bookroomreviews.com.

EcoMasters  A Planet in Peril  Book One The Pathfinder

My Real Name is Hanna by Tara Lynn Masih