The Medium Next Door book review 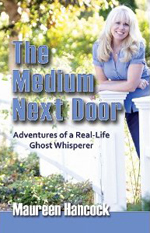 “Death is the biggest mystery and most profound experience each of us will have in this lifetime. My deep-down desire is that by joining me on this journey, you not only learn to understand life after death, but how to live – not just living as in getting up each day, going to work, and doing it all over again the next day. But living with joy. Squeeze bits of joy out of each day until all these bits explode around you like confetti. Those on the other side want this from you. They root for you to gain understanding and clarity about death, dying, and the afterlife.”

On the brink of her own TV series about medium-ship (the time and station not yet disclosed), Maureen Hancock gives us this book as a guide to her talents. Irish and born with a caul over her face at birth (which many consider an omen of prophecy), she’s the 7th born of a family of 9 and much like the character in the former Medium series, Alison Dubois, she is married and has children. She also works (in all of thse places without getting paid) at The Seeds Of Hope Foundation, healing in homes and in hospitals; for Metro-Investigation for Mission For The Missing, helping to bring home those who’ve disappeared; and at Postcards From Heaven, where she connects loved ones with those who’ve passed on before them through lectures and appearances. Known as the Comedian Medium (after having done some stand-up comedy early on), she tries to teach people through humor, plus she teaches classes in spirit communication.

After ingesting lead from eating paint on a windowsill in her nuclear family home when 18 months old and going into a coma, Maureen came home and began to see “people” in her room at night, people that her sisters and others couldn’t see. (Her mother finally got legislation passed into law on combating lead poisoning under President Nixon on January 25, 1971.) The Sacred Heart Of Jesus picture in their home “talked” to her and she predicted her Grammy Mac’s heart attack and heard from Grammy’s son Pat before he died (but not through typical means!). Fearing what was happening to her, she was at first afraid to tell her friend Jackie what her father had told her as a message from beyond the grave, but she finally did tell Jackie, which made Jackie very happy. Soon Maureen was going to homes delivering these “messages” of hope and then giving talks in which she could sense the relatives of friends and strangers through people in the audiences and tell them what their dear ones, already dead, were saying to console them.

Maureen Hancock, in this book, appears very social (as one would have to be, working with so many organizations and people constantly) and intellectual (she graces us with medical and Eastern-religion terms we may not have known otherwise). This is a life lived for other people, on a spiritual level without thought of remuneration, and a life that often leads to exhaustion, for as many pepole that she manages to help, more and more and more are always waiting in the wings. Maureen tells us, “I’m not here to convince anyone that there is an afterlife, but I do hope through my own experiences and interactions witht the living and dead that I’ve planted seeds of hope and possibilities about how there is something more out there when we leave this earth.” Read The Medium Next Door and decide for yourself!

The Medium Next Door: Adventures Of A Real-Life Ghost Whisperer by Maureen Hancock, published by HCI on May 2, 2011, 264 pages.

Christina Zawadiwsky is Ukrainian-American, born in New York City, has a degree in Fine Arts, and is a poet, artist, journalist and TV producer. She has received a National

Endowment for the Arts Award, two Wisconsin Arts Boards Awards, a Co-Ordinating Council of Literary Magazines Writers Award, and an Art Futures Award, among other honors. She was the originator and producer of Where The Waters Meet, a local TV series created to facilitate the voices of artists of all genres in the media, for which she won two national and twenty local awards, including a Commitment to Community Television Award. She is also a contributing editor to the annual Pushcart Prize Anthology, the recipient of an Outstanding Achievement Award from the Wisconsin Library Association, and has published four books of poetry. She currently reviews movies for , music for , and books for http://www.bookroomreviews.com.

So Long as We’re Together by Glenda Burgess