The Lucky Ones Book Review 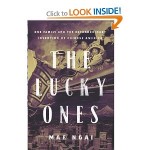 Written by a historian (and with ten years of research in the making!), The Lucky Ones none-the-less does not read like a boring tract. The protagonists (primarily the Chinese-American Tape family) come alive on the page, despite the fact that author Mae Ngai had mostly photographs (no diaries) and court records from which to determine their characters. This book is a first, the story of two self-made Chinese-Americans in the mid-to-late 1800’s and early 1900’s – that is to say, Chinese

who came to San Francisco and attempted to Americanize themselves and their families.

Being first generation myself (my parents came to New York City – where I was born – from Ukraine), I understand the peer pressure to become Americanized (although in my case I was intensely immersed in Ukrainian culture, language, arts and cuisine as Ukrainians displaced all over the world strove to keep their cultural identity, which was then being suppressed by the Russians in their own country). But Joseph Tape and Mary Tape perceived themselves as Americans and dressed their children in proper Victorian-wear because of Joseph’s enterprising business prosperity, rising from being a servant in San Francisco to having his own business moving Chinese immigrants from their ships to Chinatown in a horse-drawn wagon. Mary Tape was saved from slavery and prostitution upon her arrival in America by the Ladies Protection and Relief Society, where Mary McGladery took an interest in her and taught her not only reading and writing in English but also art and piano playing. Later, during Mary’s life with her husband Joseph, she painted voluminously and even became involved in the dark room aspects of photography.

The couple married and lived on the outskirts of San Francisco. At one point they lived on Washington Street, raising their children, and “Mary undoubtedly felt that she and her daughters were secure in this environment, with its rich concentration of white people, Christians, and other people of the artisan and middling classes” and “the children went to the Chinese Primary School a block away and pursued private musical instruction: Mamie played the piano, Emily the violin and Frank the French horn. The older girls also learned embroidery and taxidermy to preserve their father’s bird specimens” (Joseph loved hunting and owned hunting hounds). Many Chinese did not deem it important to educate their female children, but Mary and Joseph did, given Mary’s example. Later Joseph hired an amah (servant) “to help with the household, a sign of the family’s status and prosperity.” And when the state of California ruled that Chinese children could only go to Chinese schools, Joseph and Mary sued them on behalf of their daughter Mamie.

The Lucky Ones is an interesting book in which the real-life characters act humanly, the children of Joseph and Mary not always following their parents’ wishes. At one point their son Frank becomes a governmental “interpreter,” a desired position, but he actually spent his time informing against illegal Chinese to the Immigration Department. In 1806 an earthquake and fire destroyed San Francisco and thus displaced many Chinese and sparked the beginning of a newly-built commercial “tourist” Chinatown.

The story about how the children are raised continues, with Mary acknowledging them as “the same as other Caucasians, but in features.” A truly unique topic about the first Chinese-Americans in America, and I highly recommend it as not only a book about discrimination but one of finely-drawn and described noble and independent characters.

Squiggly gets glasses By Dawn Clark

The Flowers Of War book review