Across Many Mountains book review 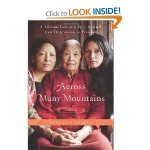 Kunsang, a young Buddhist nun, never thought that she would leave Tibet. But the occupation of the Chinese and the destruction of many monasteries made her flee with her family, across the Himalayas, in 1959. Her six-year-old daughter, Sonam, almost lost her life. But later Kunsang and Sonan met a cultured young man from Switzerland in Inida, Martin Brauen, who fell in love with Sonan and married her, and Yangzom, the author of this book, was born in Switzerland in 1980. Yangzom became an actress, model and political activist who now lives in Los Angeles and Berlin, has appeared in German and American films, and is active in the Free Tibet movement. She finds her acting “motivation in the stories of my mother, my grandmother, and their people.”

But how did all this begin, after the initial invasion of Tibet by China in 1950? On their escape trek in 1959. “For fear of Chinese soldiers, they dared walk only through the freezing nights, with no light to guide them but the stars. The mountains were black towers before the dark sky. The group, numbering a dozen or so, had set out shortly before the Tibetan New Year festival…..It was common knowledge that the Chinese border guards preferred to keep warm in their barracks during the winter rather than go on patrol in the biting cold….My mother’s heart beat wildly as she struggled to keep up with the adults. She was only six years old.”

When grandmother Kunsang had been born in the early 1920s, “there were no roads in Tibet, and no railways” and “Communication was by word of mouth.” Kunsang nearly died when she was six years old, and when she was thirteen, her father died. She entered the nunnery at age fourteen and became one of Ape Rinpoche’s students. She spent three years, three weeks, and three days in solitary meditation. She sometimes went on pilgramages to “receive teachings and initiations from old important lamas.” Yangzom Brauen wrote that “My grandmother remembers her time at Ape Rinpoche’s hermitage as the most wonderful years of her life.”

But in 1945 a young monk named Tsering Dhondup fell in love with Kunsang, and she felt reciprocal love, but wondered what effect it would have on her spiritual development. After Ape Rinpoche died Kunsang became a couple with Tsering in “a blow of fate.” And “She had never asked him to come to her, but neither could she do anything to send him away; he was simply there. She

never felt the giddy sensations of romantic love, the skipped heartbeats, the butterflies in her stomach, but with Tsering’s return, her life took a new direction.” In their culture, the tulku told them, they “could remain nun and monk, they could continue to wear the red chupa, the traditional Tibetan religious clothing.” But Kunsang became pregnant and went to her brother’s house so her sister-in-law could help deliver the baby. Kunsang gave birth to a boy who died before he was five weeks old. Then a second boy died before he reached six months. Finally she gave birth to a daughter, Sonam Dolma. The author writes of Sonam, “My mother lived her childhood days in Tibet just like Heidi in the Swiss children’s book.”

After Chinese soldiers began raiding their monastery frequently, March 10, 1959 marked the official beginning of unrest, and Kunsang and Tsering decided to try to escape to India, knowing only to head south. After a harrowing month in which, while fleeing, they made no noise in order not to alert Chinese soldiers and Sonam’s feet froze in a cave, the family arrived at the India border, where the only Indian words Kunsang knew were pani (water) and lakhri (sticks). For many years the family lived in the border town of Shimla, and at Stirling Castle (where Save The Children resided), Kunsang actually met the Dalai Lama. At Mussoorie, a near-by village where Kunsang and Sonam lived and worked after Tsering died, Sonam met her future Swiss husband, Martin Brauen.

Across Many Mountains is about refugees, and about three generations of women sprung from a Buddhist monastery and changed, in both location and life-style, by a greedy and political world. This unique and detailed story is for anyone who wants to learn about a culture and a way-of-life not their own, and about family loyalty that transcends time and space. And why did Yangzom Brauen write this book? “To prevent the culture, traditions, and true story of Mola (Kunsang) and Amala’s (Sonam’s)” country from being forgotten.”

Across Many Mountains by Yangzom Brauen, published by St. Martin’s Press on September 27, 2011, 306 pages.

Characters   An Ancient Take on Bad Behavior by James Romm