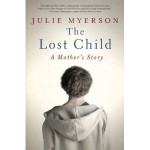 “You can make your babies and you can love them with every single cell of your being, but you can’t make them safe, you can’t in the end choose how their lives turn out.” Reading the memoir The Lost Child by Julie Myerson is heartbreaking, and, as you can guess, Julie’s son’s life turns out not as she expected but instead it became a great mess of lies, stealing, drugs, poetry, poverty and song. Weaving together threads of Mary Yelloly’s story (which began as a journal of early 1800’s watercolors Myserson came across at a book dealer’s fair), her son’s sudden addictions at the ages of 15-17 and their consequent horrific results, Myerson’s connection – and lack of connection – to her father after an ugly divorce, and poems written by her son during his early drug-taking time period, The Lost Child becomes quite a colorful tapestry!

Myerson had started out wanting just to write about what she’d discovered through her research on Mary Yelloly, but her life experience with her son (unnamed throughout the book intentionally, as are his siblings, while Yelloly’s story has names and familial detail) was so wrenching that she was compelled to contrast both stories within the same binding. Never knowing that her son would resort to lying and stealing money from the family, skipping school and being apathetic between drug quests, or that he would end up hitting her and perforating her ear drum and she’d be forced to throw him out repeatedly, as a mother Myerson still missed the “old” him and her many pre-drug memories of him (sleeping with his stuffed animal, Kangaroo, for fifteen years and his great love of his cat, Kitty, for instance). Her adventures researching Mary Yelloly’s family and the buildings in which she’d lived, her mysteries and Mary’s love of art and opera, would appear as a great task but almost a light-hearted one if we didn’t know that at the same time Myerson was burdened with wondering about whether her son had somewhere to stay or something to eat amongst his new friends. Her sad tale about her father’s resentment of her because of her mother’s move to divorce him (with her father trying to cut her off from going to school, at which she excelled as a linguist, by not paying the fees, and later cutting off from her, but not her siblings, completely) makes us realize how, even more so than other people, Myerson wanted to keep her own family together. And her son really does have a talent for poetry, which we hope has not been discarded or lost in the rubble of his life.

The Lost Child is one of the most poignant and moving books that I’ve read in a long time. Myerson is helpless in trying to change her son and bring him back to a more normal life and fears his absolute destruction, not to mention having to watch the other parents around her revel in the bright lives of their children of the same age. But she must let her son go, because there’s nothing else she can do, and the book ends on the hopeful note of him starting to make more frequent visits back home.

Christina Zawadiwsky is Ukrainian-American, born in New York City, has a degree in Fine Arts, and is a poet, artist, journalist and TV producer. She has received a National Endowment for the Arts Award, two Wisconsin Arts Boards Awards, a Co-Ordinating Council of Literary Magazines Writers Award, and an Art Futures Award, among other honors. She was the originator and producer of Where The Waters Meet, a local TV series created to facilitate the voices of artists of all genres in the media, for which she won two national and twenty local awards, including a Commitment to Community Television Award. She

is also a contributing editor to the annual Pushcart Prize Anthology, the recipient of an Outstanding Achievement Award from the Wisconsin Library Association, and has published four books of poetry. She currently reviews movies for , music for , and books for .

Clara Humble and the Not-So-Super Powers by Anna Humphrey