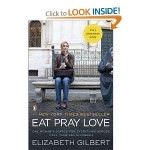 Elizabeth Gilbert intentionally divided Eat, Pray, Love into 3 sections with 36 tales of her travels in each section, just like the japa mala, 108 beads that make up an Eastern devotional rosary. These three sections represent her stories about, Italy (Eat), India (Pray), and Indonesia (Love), and how many of us would wish for such a year of travel luxury (if you can call a spiritual quest a luxury)? Obviously she is a woman who believes in structure, especially exotic structure!

Coming from “loss upon loss” (a failed marriage followed by a painful love affair), Elizabeth decides to spend her year of travel being celibate. She is tempted by Giovanni, who wants an English conversational practice partner in Italy, and is a twin – but no, Elizabeth opts for “the kind of healing and peace that can only come from solitude.” Fleeing her receding lover David, who was “catnip and kryptonite” to her, Elizabeth starts studying Italian, which she has always wanted to do, and which starts her on her journey. “Every word was a singing sparrow, a magic

trick, a truffle for me.” She seeks out a spiritual healer with “tens of thousands of students who gather in New York weekly to chant and meditate,” involving the ancient Sanskrit mantra “I honor the divinity that resides inside me.” And from there Elizabeth, who has heretofore tended to lose herself in her male partners, begins to find herself, starting with a brief journalistic assignment in Bali where she also visits a Balinese medicine man(who tells her that she will have another marriage and, later in life, a child, and that she will return to Bali to teach him English).

A complex life? Whose isn’t? But Elizabeth Gilbert’s life is interesting, so interesting that, just like her, we never know what’s waiting around the corner for this world traveller who revels in writing about her experiences. Elizabeth learns that “both pleasure and devotion require a stress-free space in which to flourish and I’d been living in a giant trash compactor of non-stop anxiety.” She has always loved travelling (since using her baby-sitting money to visit Russia), and she can make friends with anyone. We learn about Elizabeth through her adventures: what it’s like to be in an Italian language school, her struggles with depression and her search for pleasure, gaining 25 pounds in Italy eating magnificently prepared food, her search for spirituality at an ashram in India where she meets a colorful assortment of characters from all over the world including Richard from Texas, and how she falls in love with Felipe from Brazil on the highly ritualized island of Bali (as this is not the lean and spare writing of Marguerite Duras or bare-bones existentialism!). Elizabeth informs us that “the appreciation of pleasure can be an anchor of one’s humanity” and “In a world of disorder and disaster and fraud, sometimes only beauty can be trusted” and “Only in a human form and only with a human mind can God-realization ever occur.”

Whether battling to maintain silence or particularly disliking long Hindu rituals or her attempts to help an Indonesian healer (a woman, Wayan, formerly physically abused by her alcoholic husband) buy a house for her child and two other orphans, we constantly see Elizabeth seeking and seeking because she so much wants to understand “God dwells within you, as you.” At the end of her glorious year she writes: “I think about the woman I have become lately, about the life that I am now living and about how much I always wanted to live this life, liberated from the force of pretending to be anyone other than myself,” as now time has passed and her formerly unbearable relationship endings have become a part of the past for her. Very few writers are able to write in such great detail about their lives and how they try to understand them, and I highly recommend this book that will intrigue and entrance you with every page. Eat, Pray, Love has also been made into a movie starring Julia Roberts now playing in theaters across America.

ONE LITTLE PIG by Laura Lee Scott and Cheryl Crouthamel