“The book was written and designed to shed light on the abuses of the past, put the present into context, and inform the delivery of care in the future.” Snowball..

A well-travelled, intelligent, self-employed purveyor of life.  Snowball a former soldier and firefighter, survived the hardships, rigours and brutality of 1960-1970s childcare, to become a successful, respected member of the very society that had so brutally rejected him.  Dedicated to the protection of children in the childcare system, snowball has now embarked on speaking engagements around the country, in order to ensure that the lessons of the past, are used to inform the practices of the future.  An inspirational, humorous and often witty character, snowball brings a radiant light into the darkest areas of historical abuse within the childcare system. So here he tells you about the book…

The book began when I attended a writing event organised by Amanda Knowles (MBE) and a lady called Rosie Canning. The event was specifically targeted at Care experienced People, who in my opinion, are a very much neglected group in terms of sociological research and political consideration. 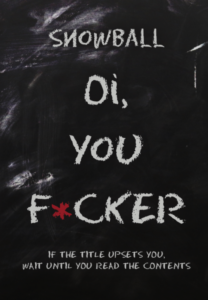 I had tinkered with the idea of writing previously, but never got round to it, and I figured that an event specifically tailored at recognising my personal history, was the best place to begin. After the event, it all seemed like a case of the right time, and the right place, and so I simply started writing, then couldn’t stop. It seemed that the more I wrote, the more I wanted to write, and the importance of the book, in terms of the message and insight into childcare in years gone by, seemed to manifest itself sentence by sentence.

In a society that is quick to judge, and slow to empathize, little seems to be appreciated about the direct impacts upon thousands of lost lives and souls, in relation to the abuses that they suffered, at the hands of a system that was ironically designed to protect them from abuse.

And so the book, Oi You F*cker was born, with a clear and specific remit in my mind, in that it would expose, in a level of cold brutal honesty, the historical abuses that were inflicted, hidden and denied, and the context in which they occurred. The book in itself is not about seeking justice, but more in the vein of removing the deniability and complicity that shrouded the abuses. Thousands of children suffered, and in telling my story, I wanted to tell the story of every one of those children.

I spent the first sixteen and a half years of my life in one form of home or another. It was a brutal indoctrination into a pretty care-bereft world as it was at the time. In a life of orchestrated uncertainty, the only certainty that existed, was the abuse that would visit us daily. This was the environment in which I grew up up. It is the environment that the book exposes, and the environment that, though better concealed, we need to be wary of today.

So the book is designed to help a varied cross section of people. It should help the families of those who never lived through or beyond their childcare experience, to understand that not everything was the fault of their child, and that the system played its part, badly. It should help social care professionals, in understanding their responsibilities, and the impact of complicity, either by action or silence. It should help those who suffered, but feel they are not articulate enough, or emotionally stable enough, to convey their experiences in their own words. To the man, woman or young adult, living out of cardboard boxes, in hostels or in prisons and hospital settings across the country, who struggle to understand the complexities of their personalities, but who share the experience of the childcare system, this should help. To the good people who were powerless to intervene and end the abuses, this should help. It needs to help the survivors, as does society, and most of all, It should help the abusers understand the impact of their actions, the lives they have ruined, and the promotion of reconciliation.

NB: If you have wondered about the title, there is a simple explanation. It was how we were spoken to as children in many of the homes. I thought it was my name for two years!!

This book is about the harrowing, personal and first-hand experiences of the 1960-80s childcare system..

It highlights the brutally horrific system, that made countless victims of the very children it was designed to protect. These brutally horrific regimes, founded upon extraordinary levels of inhumanity, cruelty, violence, fear, and intimidation, brought children to their knees, brutalised, cowed and often in fear for their very existence.

It was a stark, depressive, and oppressively dysfunctional system, that imposed perpetual physical suffering and mental hardship, upon its most vulnerable charges. It was a pernicious cycle of ritualised systematic abuse, inflicted on some of the most vulnerable children society could offer up.

“The book was written and designed to shed light on the abuses of the past, put the present into context, and inform the delivery of care in the future.” Snowball..

This was the environment that the ‘Unfortunates’ found themselves embedded in during the 1960s. It was a system that lacked care, thought, and all things humane. A system where the imposition of brutal physical and sexual abuse had become normalised, legitimised, embraced and ultimately, forcefully accepted. This was life in a local authority home.

These were the homes of ‘the Damned’, where a catalogue of daily horrors were inflicted for the personal pleasure of those charged with the care of this hidden, and often forgotten, sub-culture of children who, through no fault of their own, were forced to embrace these traumas, and endure a fight for their very survival.

“One of the most emotional journeys you will ever take with a child who survives unbelievable childhood adversity. it truly is a tribute to the child and the man who wrote it.” Amanda Knowles.

“All workers in the child protection industry across the world should have to read Oi, You F*cker as part of their training and professional development.” Dr Dee Michell.

How Online Summer Training Helps Your Children To Keep Them Locked In?