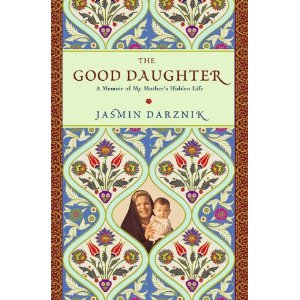 “If I wanted to write my life story…..there wouldn’t be enough pages in the world to write it on!” So says Kobra, Lili’s mother, in the memoir The Good Daughter , and what she says could be the theme for both the entire book and Lili’s life. I have never heard of a life so filled with ethnicity, enthusiasm, travails, new ventures, abuse (at the hands of crazy and/or alcoholic husbands), travels and immigration to new lands, and the resignation of each woman to her own eventual fate.

Jasmin (the author of this book) is called by her mother Lili to San Francisco from the East Coast where she has been studying at universities because her father, Johann, who is originally from Germany, is dying. He dies before she arrives and she stays for forty days after his death to help her mother Lili grieve, like a good Iranian daughter, until his body is sent to Germany. During this time she discovers a photograph that implies that her mother had a life and a marriage precedent to being with Johann, which had been kept secret all these years. At first her mother is angry and accuses her of stealing, but after Jasmin returns to the East Coast Lili sends her ten cassette tapes, one by one, on which she’s recorded the story of her life.

And what a life it was, one in which Lili made her own way with resourcefulness, ingenuity, industriousness and hard work and the ability to change completely as her own circumstances changed. Particularly exotic to Americans, daily life in Iran was so different than her later life in America, and as a child never did Lili think she’d end up with a “damad farangi,” a foreign suitor who became her husband. Viewing the photo of her mother dressed as a very young girl in a satin wedding dress and veil, eyes lined with kohl and sitting next to an older, balding man (Kazem), Jasmin realizes just how little she’s known of her mother’s “gesmat,” her destiny. Jasmin’s great-grandmother, Pargol (meaning “flower petal”), named her ninth child Kobra, who was born in 1921, “the great one,” and Kobra was beautiful, with “honey-colored eyes” and black hair, and was given a small blue eye pendant to wear on a black string around her neck to distract the Evil Eye and the jealousy of others. She wore a veil when outdoors, as was common then, and went to sewing school, at which she was so particularly adept that she became not only a teacher but a seamstress. Her older, European-like brother Sohrab offered her as a bribe to make up for his gambling debts, but once married she had to go, as was the custom, to

live with her husband and his entire original family under the care of her mother-in-law, Khanoom, who had shown her family wealth and riches but when Kobra arrived made her cook in the kitchen all day with the servants. Later Kobra bore both a son, Nader, and a daughter, Lili, but then spent years waiting all night every night for Sohrab, who went out alone to parties and met women in Western dress and finally took a mistress who was an “aroos farangi,” one who could pass as European, and sometimes when he arrived home late Kobra was beaten (but practiced “besooz-o-besaz,” which means “burn inwardly and accommodate”). In 1936 the Shah outlawed the veil and as an 11-year-old Lili was sought out by the then 26-year-old Kazem, who wanted her for his wife, and eventually she was given to him in marriage and gave birth, at the age of 13, to a daughter, Sara. However Kazem was mentally ill and would drink all night and come home and beat Lili, until her father, Sohrab, helped her divorce Kazem, which was virtually unheard-of at that time.

Sohrab, who was modern, was determined to send both his children to school, including Lili even though she was female. Lili attended a British school in Tehran while her brother Nader was sent to Germany, and Lili eventually went to Germany also to become a midwife, which in Iran would give her the status of a doctor. Unfortunately her father Sohrab was killed in a car accident at the age of 42, and Lili and Nader went home and then Lili returned to Germany to become certified, during which time she met her husband-to-be, Johann, while her “good” Iranian daughter, Sara, stayed home and was cared for by Khanoom. Johann, who had worked as an engineer in Germany, became a Muslim for Lili, and they moved back to Iran and lived there for 15 years as Lili worked at hospitals and women’s clinics, at the end starting her own small clinic. But then Lili had a child, Jasmin, and a dream about smoke which led her to believe that they should leave for America.

A life with so many unexpected twists and turns! Leaving Sara behind again, Johann and Lili settled in San Francisco, and because their credentials weren’t worth much in America, plus they suffered anti-immigrant feeling, they bought a motel to try to survive. Johann drank heavily and Lili was left with all of the work, the proceeds of which she used to pay for ballet, French, Persian, piano, ice-skating, swimming and German lessons for Jasmin. Although Kobra came to visit them for many months at a time, Jasmin became more American than Persian, always being told about the “good” Persian daughter that she was not, while in Iran Sara married and had three children and often phoned Lili asking why she had abandoned her.

Rich in Iranian social history and ethnicity, and passionately written (or, rather, re-told) by Jasmin, whose life became esconced in academia and literature, The Good Daughter is both a sensory feast and the story of a brave woman who sought to free herself as a female from the chains of tradition (of which this review offers only a brief summary). That Jasmin only knew Lili as the American semi-misfit who catered to truckers and transients at her motel is amazing, and we feel for her as the story of her mother’s entire life unfolds. In reading this book I felt as if I were being treated to a long and intricate tale told to me by a dear friend, and I was sorry to have to turn the final page! The Good Daughter is enriching and a book that I wish many Americans could read, one in which we learn “Where there is too much distance and too many leave-takings, there are no returns, or none in which we can finally believe. Still, one love always entangles itself in another, grows unrecognizable, and survives.”

The Good Daughter, A Memoir Of My Mother’s Hidden Life, by Jasmin Darznik, published by the Grand Central Publishing Company on 1-27-11, 324 pages.