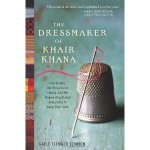 “The Dressmaker Of Khair Khana gives voice to many of our world’s unsung heroes. Against all odds, these young women created hope and community, and they never gave up. This book is guaranteed to move you – and to show you a side of Afghanistan few ever see” — Angelina Jolie. This is a book that needed to be written and it was written by a journalist, Gayle Tzemach Lemmon, who had never been to Kabul (in Afghanistan) before. She wrote it to show the resourcefullness of women entrepreneurs against the Taliban. Many of the Taliban army men were “orphans whose parents had been killed when Soviet bombs laid waste to their southern villages” and “In the camps in which they had grown up, many refugee families kept their wives and daughters indoors nearly all the time to ensure their safety and honor”. So since the Taliban men had almost no contact with women and they were taught by “deeply religious madrassa teachers who schooled them in a singular unforgiving interpretation of Islam very different from the Afghan tradition,” they saw Kabul as a Sodom and Gomorrah that was “desperately in need of spiritual cleansing.” Music, televison, playing cards or chess and even flying kites were banned, and “accused thieves had one hand and one foot cut off and their severed limbs were hung from posts on street corners as a warning to others.” Even pregnant women were beaten in the streets for slight dress infractions.

The Taliban ruled: “Women will stay at home/Women are not permitted to work/Women must wear the chadri in public.” Women were “banished to their living rooms,” especially the 30,000 Kabul families headed by widows who could no longer support their children. Kamela (the protagonist of the book) had a father, Mr. Sediqi, who had nine daughters and was trying to educate all of them professionally (along with his two sons) when “all of their plans for the future had completely disappeared in what felt like a heartbeat.” The Ministry For The Promotion Of Virtue and Suppression Of Vice took women who were accused of infidelity away to prison, where only sometimes family members could free them through money and begging.

To foster morale among women, Kamela Sediqi started a secret neighborhood book swap. Then Kamela asked her older sister Malekkeh to teach her to sew so that she could start a business in her own home (thinking “we could build a dress-making empire, The Sediqi Sisters!”). Kamela vowed to follow all the Taliban rules and always be escorted by a mabram, a male family member, when she went out of the house to sell her dresses (in this case her 13-yr.-old brother Rahim was her mabram). Adopting the name of Roya, she made her first successful sell to a shopkeeper and took home the fabrics for his orders.

Author Gayle Tzemach Lemmon presents a vivid depiction of Kamela’s life and struggles (as Kamela told herself, “I can be scared, I’m doing this for my family”), including how she also employed other women in her neighborhood and later worked for international organizations like the Community Forums and the United Nation’s Habitat. Eventually she was even asked by American Secretary Of State Condeleeza Rice to come to come and speak in Washington, D.C. (since the Taliban abandoned Kabul on November 13, 2001), and started her own company, Kaweyan, a business consulting firm. Kamela Sediqi was always positive about the future and “prayed for her country, which had known nothing but war and bloodshed for her entire life.” Journalist Gayle Zemach Lemmon also wrote The Dressmaker Of Khair Khana because “Brave young women complete heroic acts every day, with no one bearing witness. This was a chance to even the ledger, to share one small story that made the difference between starvation and survival.” A must-read!

The Dressmaker Of Khair Khana, written by

The Sugar Story by Emelie Kamp